A Home Kitchen for a Professional Chef 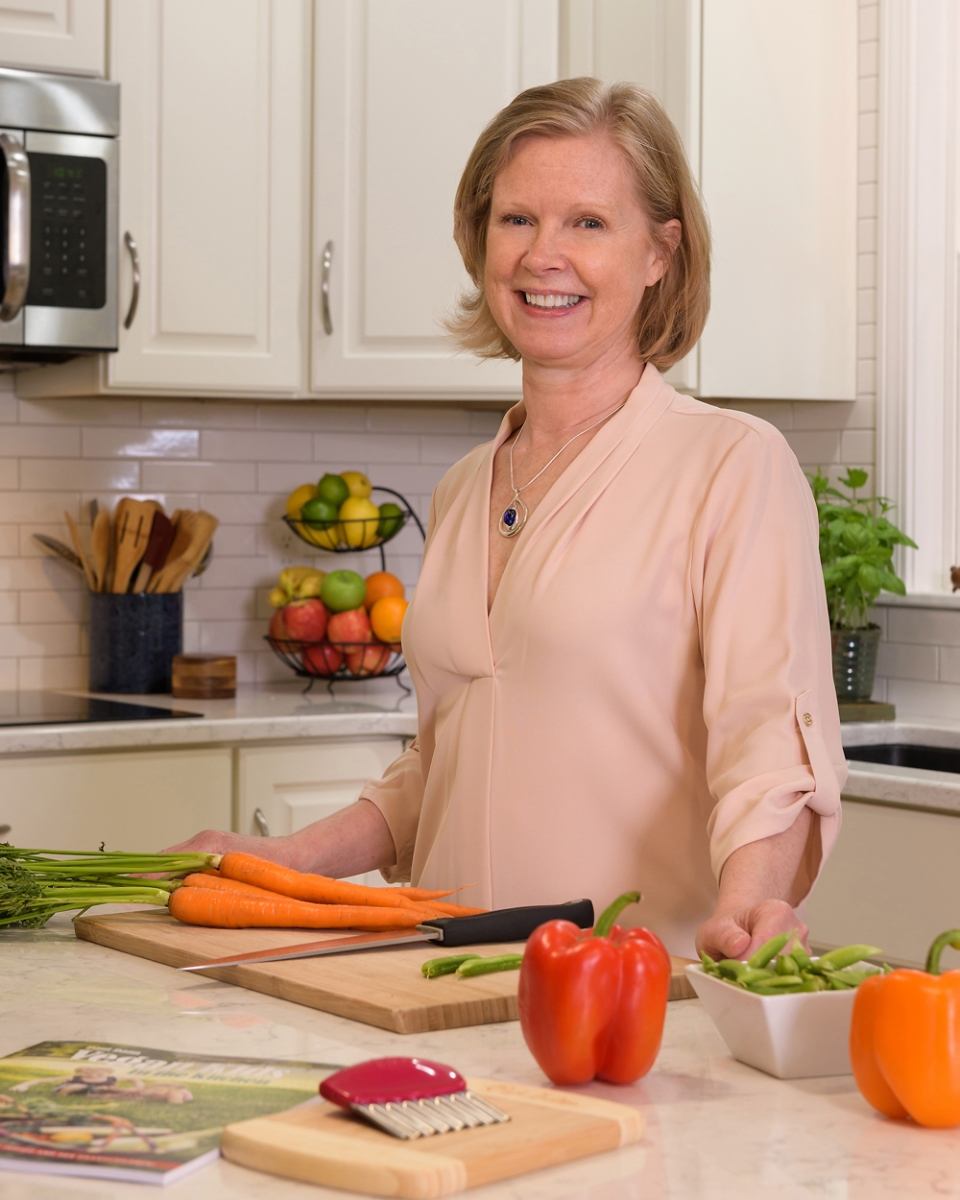 You might expect that the chef of an award-winning vegan bakery and café would have a state-of-the-art kitchen in her home, but until recently, this was not the case for Patti Dann, owner of Café Indigo.

Patti operated the vegan restaurant for more than seven years, earning rave reviews for specialties such as her vegan take on a Reuben sandwich or her signature carrot cake. Yet in the home she shared in Hopkinton with her husband, Paul, and their three daughters, she prepared meals in a small, 1970s-era galley kitchen. In fact, husband and wife (he is also an accomplished cook) often cooked together, despite the tight quarters.

Patti says she and her husband knew they would remodel the kitchen from the day they moved into their split-level house more than twenty years ago. But there were children to raise and, eventually, a business to run. Patti opened Café Indigo in 2007, after a surprise success creating a vegan carrot cake for one daughter’s wedding. She had already been cooking vegan for years, because the girls had become vegetarians and then vegan. “For our family, everything revolves around meals,” Patti says. “We eat together, and I didn’t want to be making three or four different items for dinner.” So she experimented with new vegan recipes and converting old recipes to vegan counterparts.

Patti closed the retail side of Café Indigo in 2014 in order to spend more time with her grandchildren. These days, her famous carrot cake and other baked goods are made in Café Indigo’s production facility in New York, and can be found at Whole Foods and other specialty grocery stores across the country.

Patti now does a lot of cooking for and with her grandchildren, the results of which appear in her new cookbook, Vegan Kids in the Kitchen, which features kid-friendly dishes, such as apple crisp, fruit salad and bean burgers. Because of her new home kitchen, which was finished earlier this year, cooking with grandkids has become even more fun.

The Danns had a reason other than being busy for waiting to remodel their kitchen: they wanted to do it right. Paul’s mother had double ovens, and Patti knew she wanted them, too (the tiny galley kitchen had a single oven). Patti also wanted a center island and a cooktop—not to mention room to move. It was pretty evident that a kitchen redo was going to involve a lot more than just replacing countertops and cabinet fronts.

Eventually, with the help of kitchen designer and general contractor Cheryl Tufts, of 3W design in Concord, the couple arrived at a plan that opened up the downstairs space, including the addition of French doors between the porch and the interior living/dining area.

“The first-floor rooms were very closed off,” Tufts says. “We were able to open the space both in the interior and out into their large screened porch to take advantage of the beautiful wooded exterior.

“I learned a lot about vegan diets. It was a reward to create a space for a great couple who truly love to cook and spend time in their kitchen.”

Having a professional kitchen design-er help plan and execute the project was essential, Patti says, especially because the rooms needed to be reconfigured and opened up (the double ovens are now where a door used to be, for example). Because the new design is relatively open concept, the remodeled kitchen needed to harmonize with the rest of the family furnishings—many of them antiques—in the living and dining area.

Among the biggest changes are maple floors throughout the first floor, including the kitchen. “I was nervous about wood floors in the kitchen,” Patti says. “But it has worked out very well.” 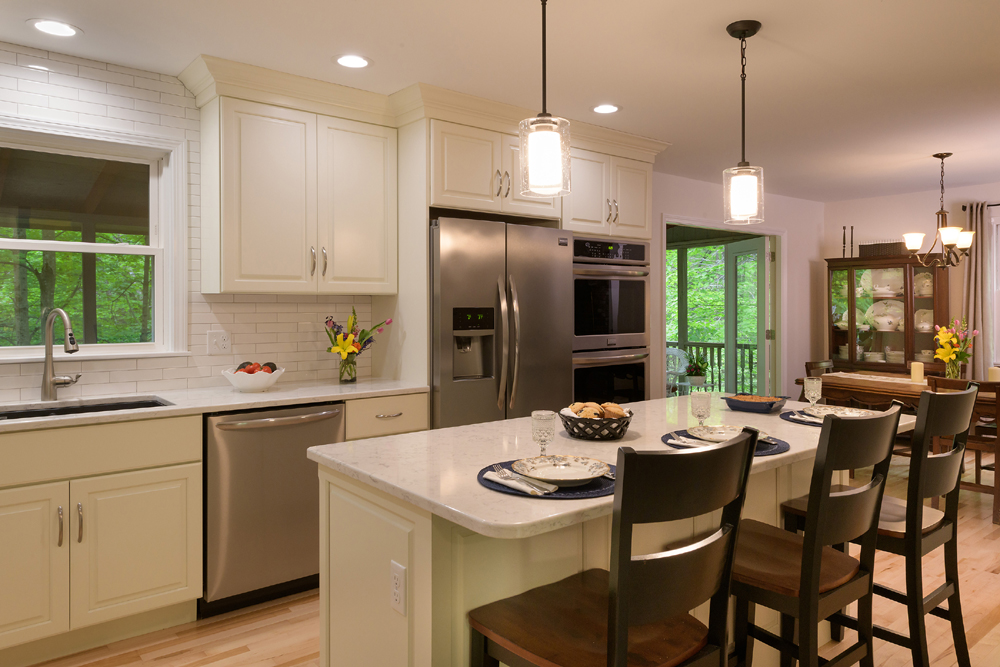 Patti and Paul Dann recently replaced their 1970s galley kitchen with a bigger, brighter and better equipped version, thanks to help from Cheryl Tufts, of 3W design in Concord.

The wood floors were also in keeping with her desired aesthetic: “I wanted a nice, clean look,” she says. To that end, the feel of the new kitchen is comfortably between modern and traditional, with off-white cabinetry (from Candlelight Cabinetry in Lockport, New York) and paintwork as well as stainless-steel appliances (from Baron’s Major Brands in Concord), such as the refrigerator and dishwasher.

A large center island has a quartz top from Rumford Stone in Pembroke. Three bar stools make a practical and pleasant spot for food preparation—and food consumption. Two pendant lamps shed light over the island. Where there used to be faux brick on the wall between the cabinet and the countertop is now gleaming white subway tile, a particular favorite of Patti’s.

Patti says the renovation went smoothly: “We knew what we were getting into.” The only major hiccup occurred when it became clear the house’s vintage electrical system was not up to the demands of the new kitchen, so the Danns had to add a new electrical panel.

Of course, renovating a kitchen presents a logistical challenge for anyone, especially people who like to cook. The entire project took about five to six weeks, during which the Danns cooked in a small makeshift kitchen in the upstairs study, complete with crock pot and toaster oven. “We also ate out a lot,” Patti says.

Patti wasted no time putting the new kitchen to use. “This kitchen gets used. It’s what I do,” Patti says.

Her grandchildren use it too, making food themselves (with a little help from Patti). “They all have their favorites,” Patti says, including fruit salad, which is as popular to make as it is to eat due to a certain tool the kids love (“It’s all about the melon baller,” she says). Patti included many of those favorites in her new cookbook, which is designed to allow kids to do almost all the preparation themselves, with a bit of help from a grown-up. These kid-friendly recipes are tasty, but they are also fun.

Fun is an important ingredient for Patti when it comes to cooking and especially cooking vegan. Patti recommends taking a moderate (instead of a strict) line in terms of your veganism. “You have to do what works for you,” she says. “If you are craving ice cream, go have it. You have to do it at your own speed, in your own way.”

Recipes courtesy of Vegan Kids in the Kitchen 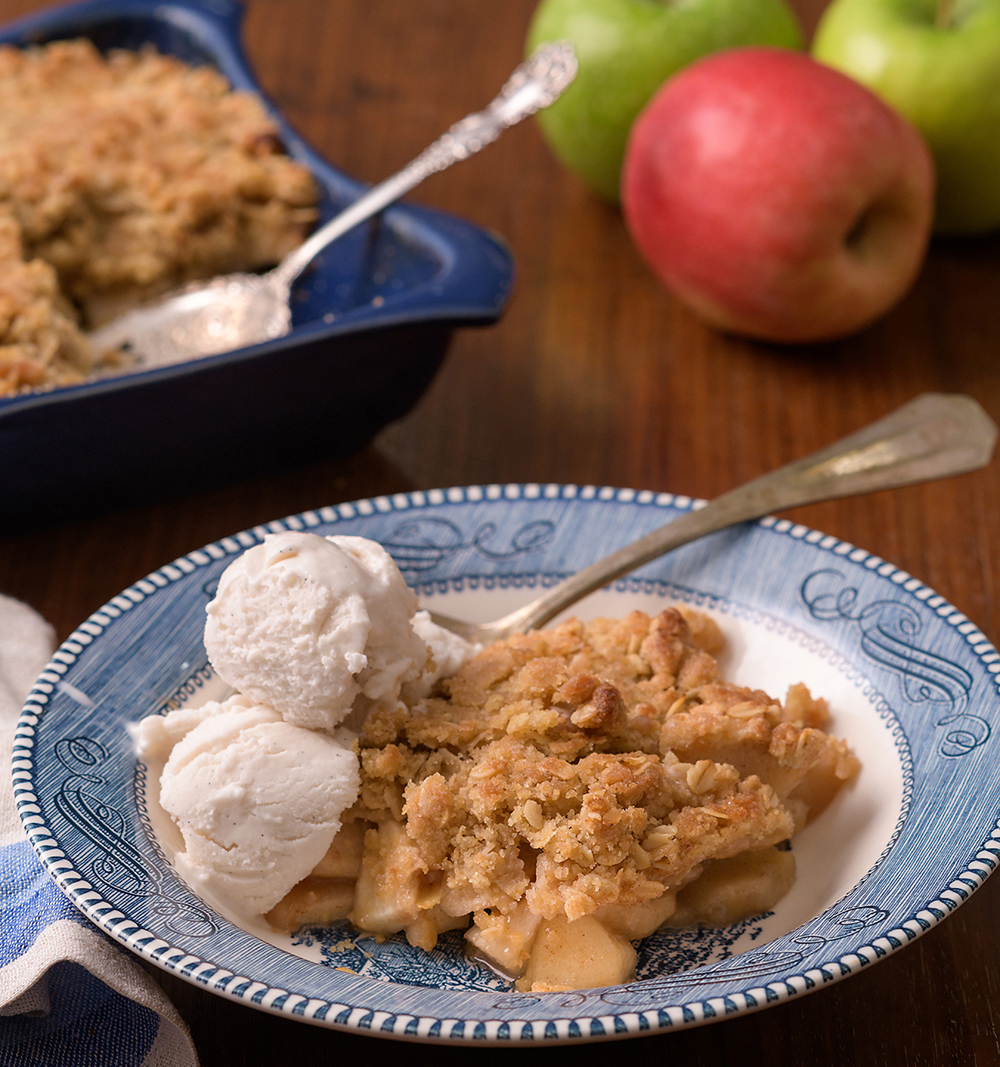 1/3 cup vegan spread (such as Earth Balance) plus 1 teaspoon, divided

2. Wash the apples, and with the help of an adult, cut the apples into quarters and remove the seeds. Chop the apples and place them in a mixing bowl. Add the white sugar, 1 teaspoon flour and cinnamon, and gently mix to coat the apples. Transfer the apple mixture to a pie plate. Sprinkle the water over the apples.

3. Mix together the remaining vegan spread, flour, oats and brown sugar until they are crumbly. Spread the topping over the apples.

4. With the help of an adult, bake for 50 minutes. Turn the oven off and let the apple crisp cool in the oven for 30 minutes. 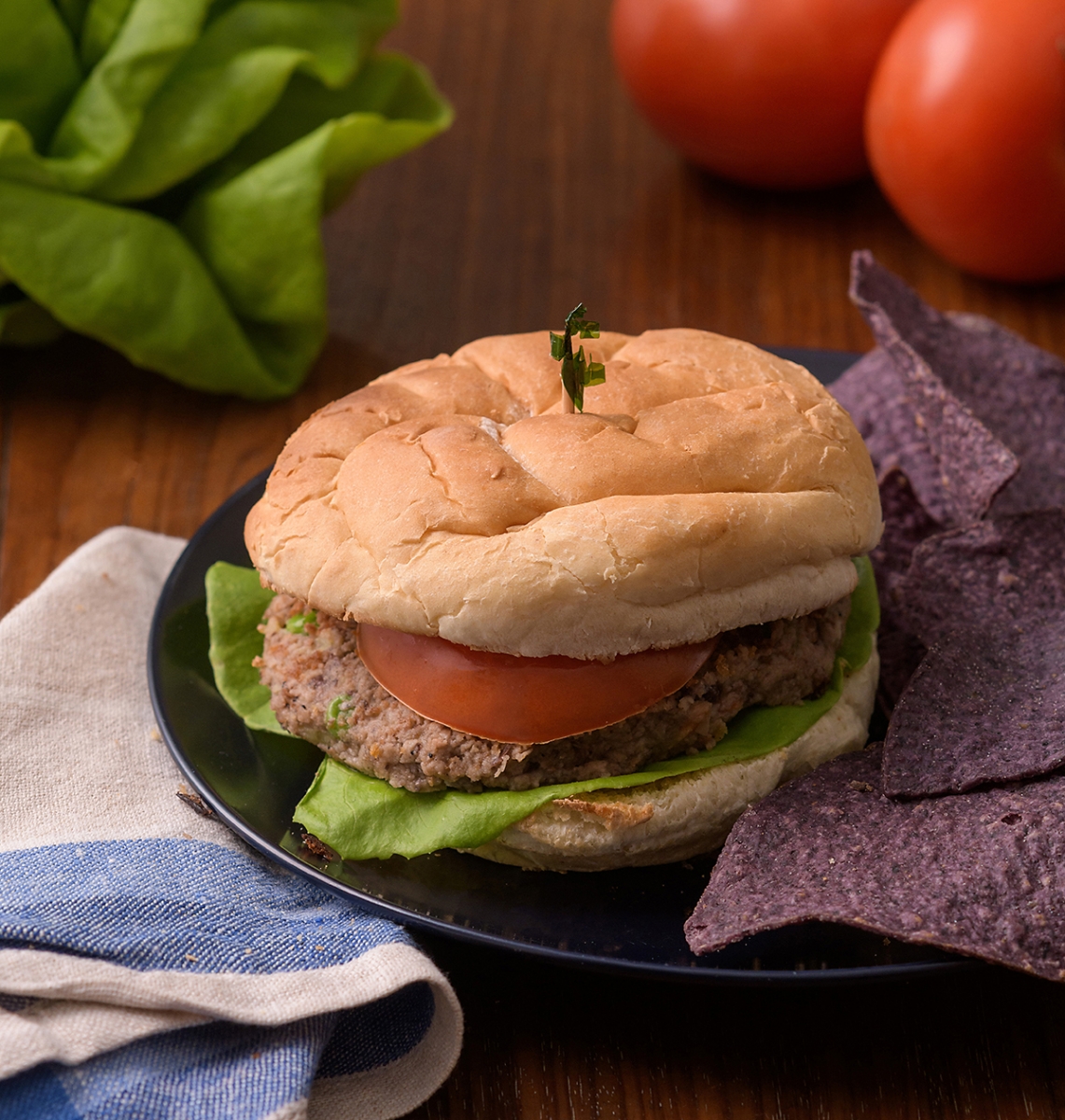 * This recipe needs a sweet potato that is already cooked and cooled. Ask an adult to help with that while you get everything else ready. You can add the potato at the end.

1. Wash and peel the carrot. Carefully, grate the carrot and place in a mixing bowl. Rinse the black beans and add them to the bowl. Add the peas, onion powder, garlic powder and paprika. Use your hands to mix everything together. This helps to mash some of the beans.

2. Add the cooled sweet potato and mix some more.

3. Form into burgers and, with the help of an adult, place in a frying pan over medium heat. Cook until browned on each side. 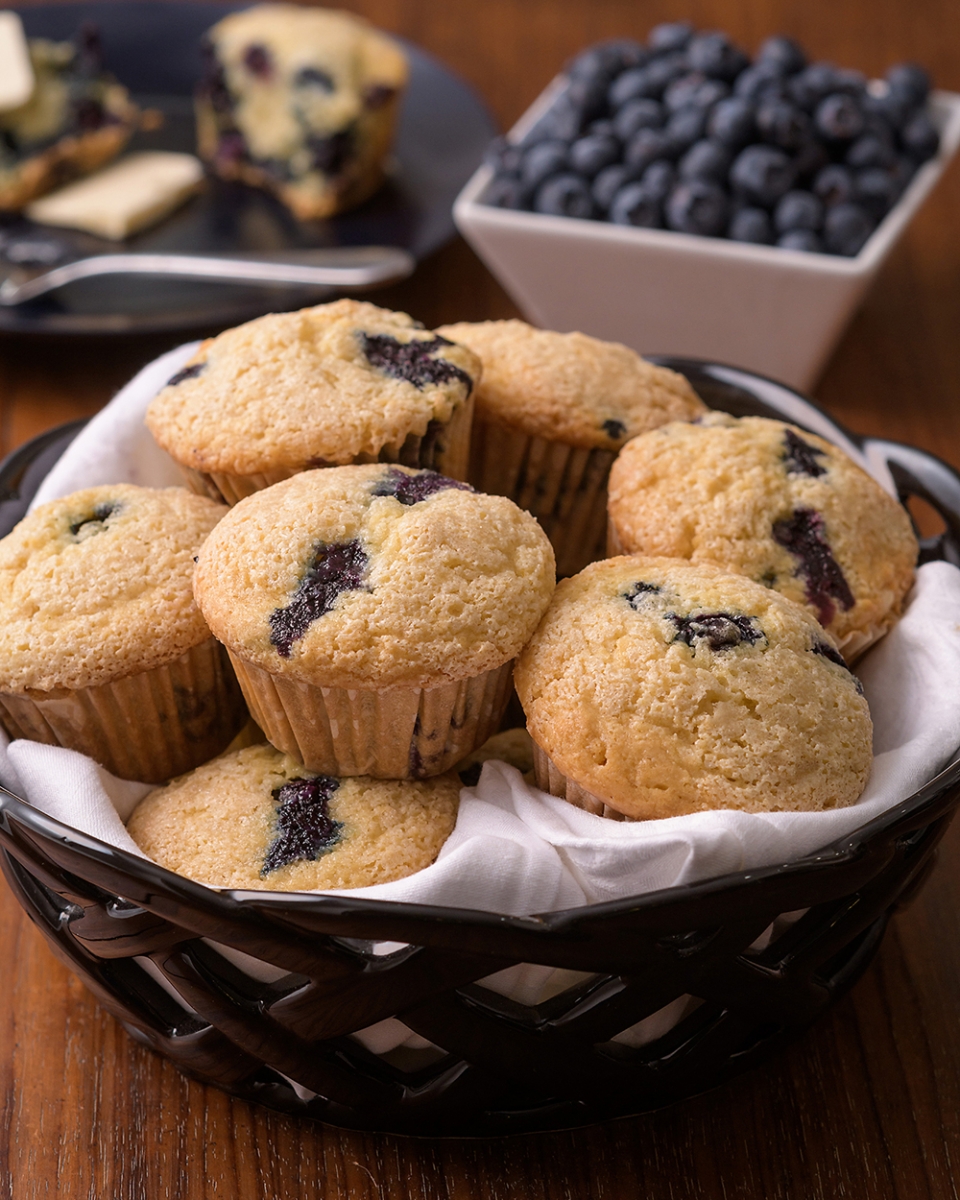 1. Preheat the oven to 400°F. Place muffin cups in a muffin pan and set aside. Wash the lemon and carefully use a zester to get ½ teaspoon of fresh lemon zest.

2. Mix together the soy milk, lemon juice, lemon zest and vanilla, and set aside. This will curdle and thicken—and that’s OK.

3. Combine the flour, sugar, baking powder, baking soda, salt and vegan spread in another mixing bowl. Add the soy milk mixture, and stir until everything is mixed in. It’s okay for the batter to be a little lumpy. Carefully stir in the blueberries.

4. Put 1/3 cup of batter into each muffin cup. With the help of an adult, place the muffin pan in the oven and bake for 20–25 minutes. 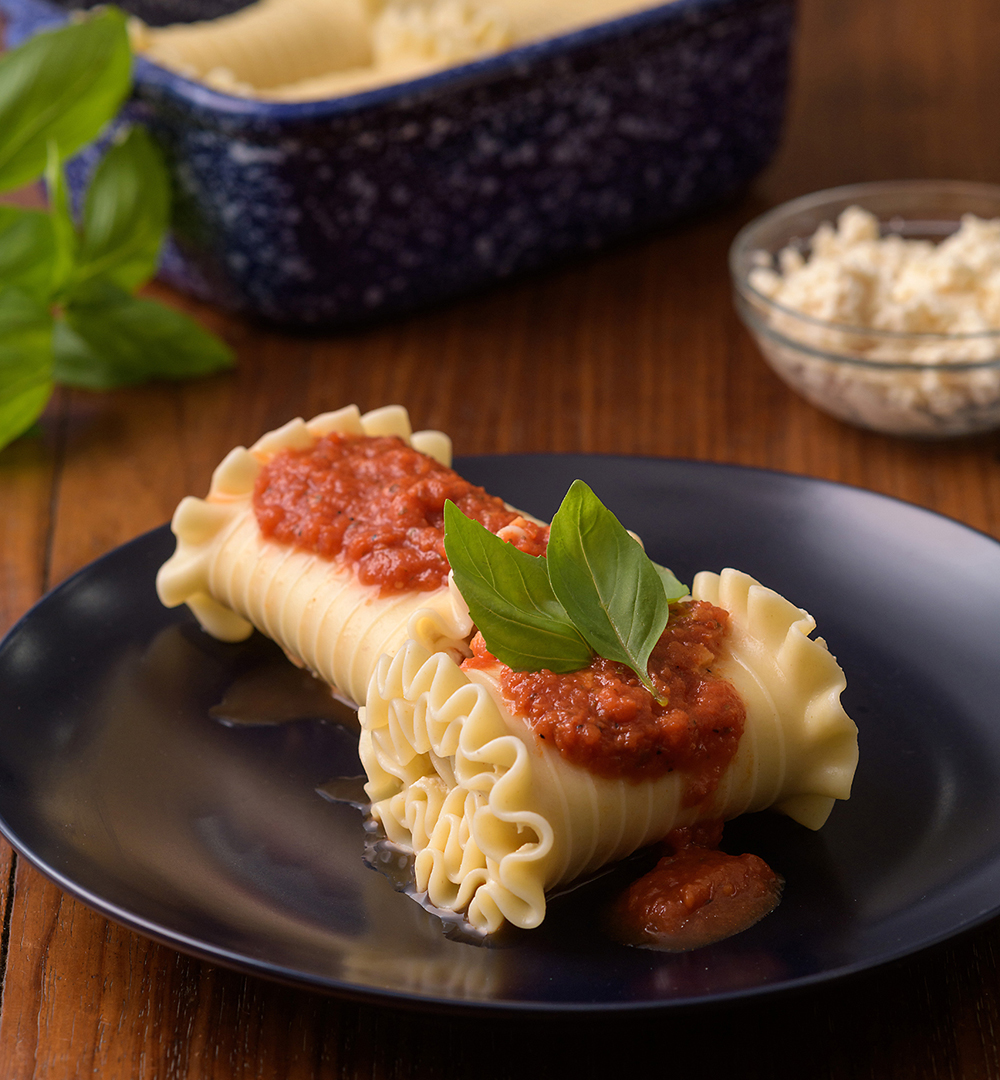 9 lasagna noodles, cooked according to directions on the package and cooled

1. Preheat the oven to 350°F. To make the ricotta, crumble the tofu into a mixing bowl. Add the garlic powder, onion salt, olive oil and nutritional yeast. Stir until the seasonings are mixed in.

2. Measure out 1 cup of pasta sauce and pour into the bottom of a 9-inch-by-9-inch baking dish.

3. Place a noodle on a cutting board. Spread 1–2 tablespoons of ricotta mixture on the noodle. Roll up and place in the baking dish. Repeat with the other noodles. Pour 1 cup of pasta sauce over the noodles.

4. With the help of an adult, place the baking dish in the oven and bake for 20 minutes. Cool before serving.