A Kitchen That Brings the Outside In 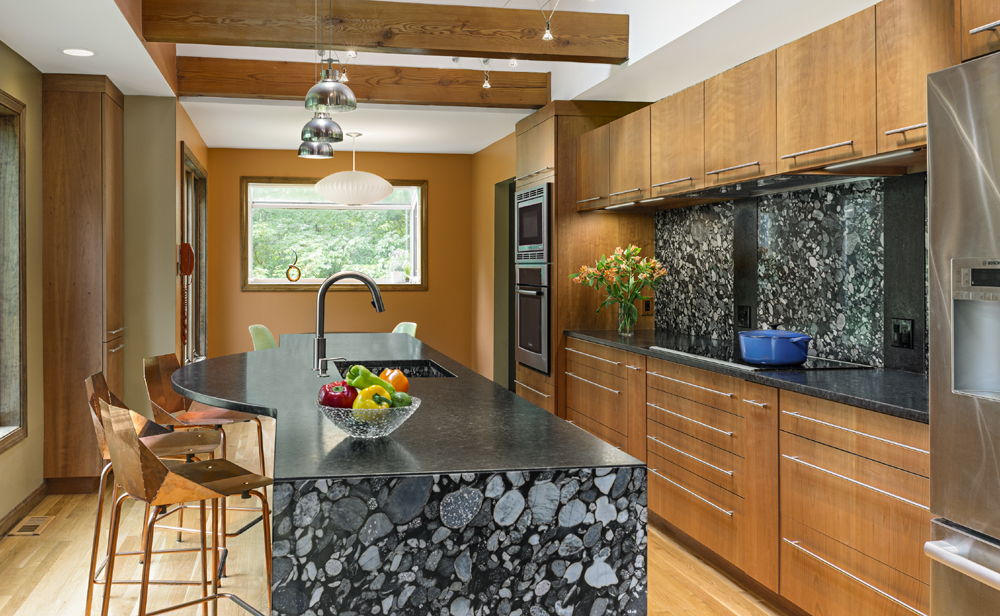 It’s not unusual to use the outdoors as inspiration for a home renovation. But it’s not often that you can bring the outside in. That’s exactly what kitchen designer Nina Hackel, president of Dream Kitchens in Nashua, did for Mickey Hudson and Don Henry’s new kitchen.

The couple’s home is on a river in southern New Hampshire. “We decided that the river should be the theme for the kitchen,” Hackel says.

The original kitchen was small and narrow. “You couldn’t walk through it, and there was no place to sit,” Hackel says.

She created a larger space by reconfiguring the existing dining room. One wall was opened up visually by adding a six-foot-high picture window overlooking the river. Now, the couple can look out the window as they cook. A cathedral ceiling, crossed by natural wooden beams, generates more natural light. Natural cherry cabinetry lines the wall opposite the picture window. “People usually think cherry is dark, but this is a high grade of cherry that has less variance,” Hackel says. “It’s a beautiful, rich color.”

The showstoppers are the center island and granite-trimmed walls, which tie in visually with the river view as well as a stone fireplace in the adjacent family room. Topped by leathered black granite, the island has “waterfall” edges, faced on two sides and in the sink with black granite containing split flow river rocks, reminiscent of a river bottom. Thoughtful details include a bump-out on the island to accommodate extra seating and a dishwasher hidden by cherry cabinetry next to the sink.

The river stone and leathered granite are repeated on the wall facing the island, behind a sleek induction cooktop. The stove hood is hidden behind a row of upper cabinets, which provide ample storage; black leathered granite strips hide the wall outlets. The counter is framed by the stainless-steel refrigerator on one end and double ovens on the other. Additional storage was created by a new pantry space next to the wall ovens. Henry did a lot of research on lighting, and selected the LED undercabinet lighting as well as the pendant lights and overhead lighting system. The overall effect is modern and streamlined.

Hudson and Henry are thrilled with the results. “Nina was great to work with,” Henry says. “She really let us bring in our own ideas and design thoughts.”

And the couple loves the views. “It’s really fun to cook in the kitchen and have people sit at the island and watch,” Henry says. “I love being able to look outside the window and see the river.”