A Quest for Local Spirits

A craft distillery in Tamworth sets the standard and pioneers new tastes. 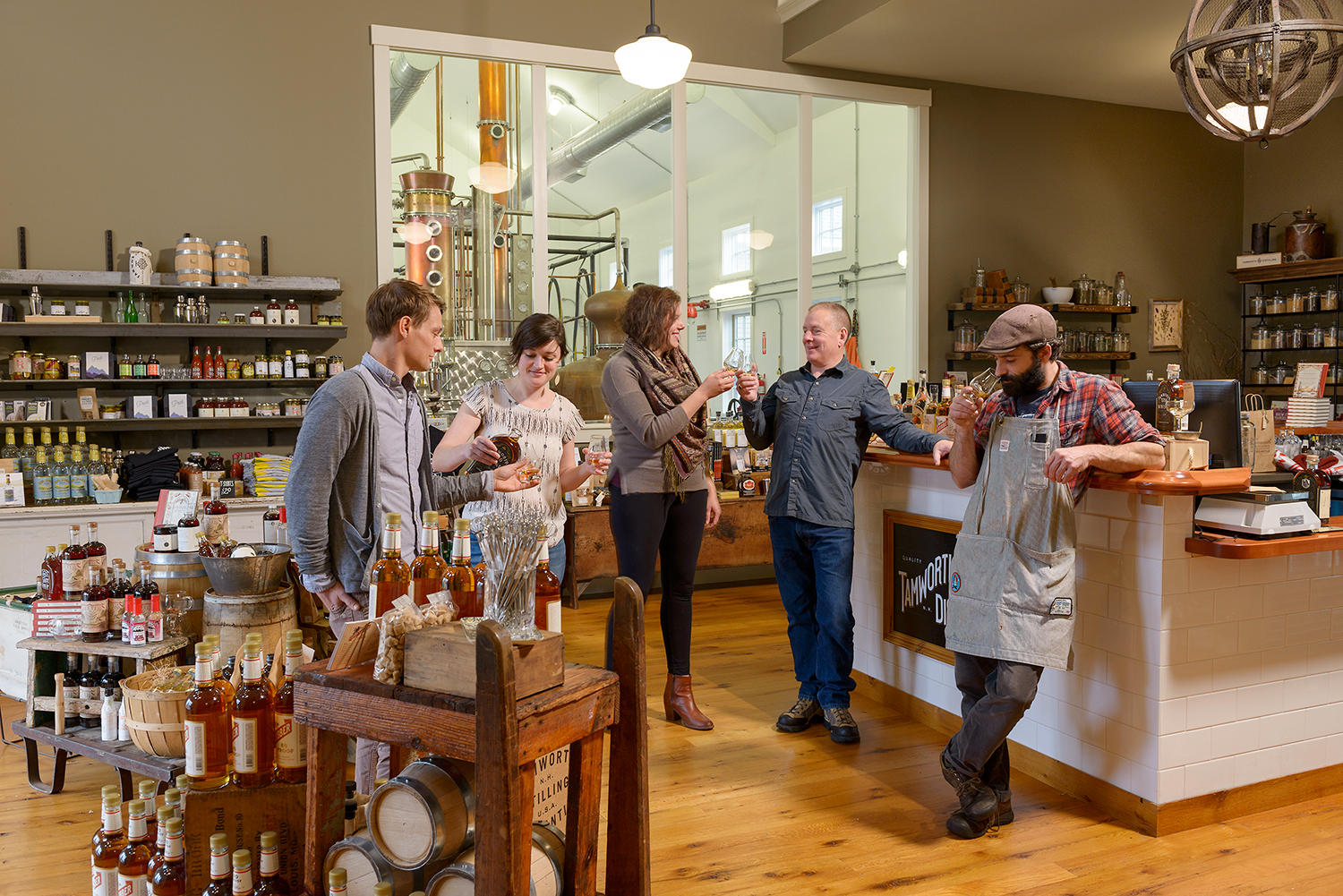 Spring in New Hampshire calls for something seriously tonic. At Tamworth Distilling & Mercantile’s tasting bar in Tamworth, you can sip and very likely find a spirit that sings your tune.

Opened in the spring of 2014, Tamworth Distilling is the brainchild of visionary Steven Grasse, owner of Quaker City Mercantile, a marketing firm in Philadelphia. Billing himself as a “renaissance brand maker,” Steven has promoted worldwide brands such as Hendrick’s Gin, Art in the Age, Sailor Jerry Spiced Rum and Narragansett Beer. Having achieved this success and given his deep abiding interest in Colonial America and Transcendentalism, Steven wanted to try craft distilling in a new way, from the ground up. 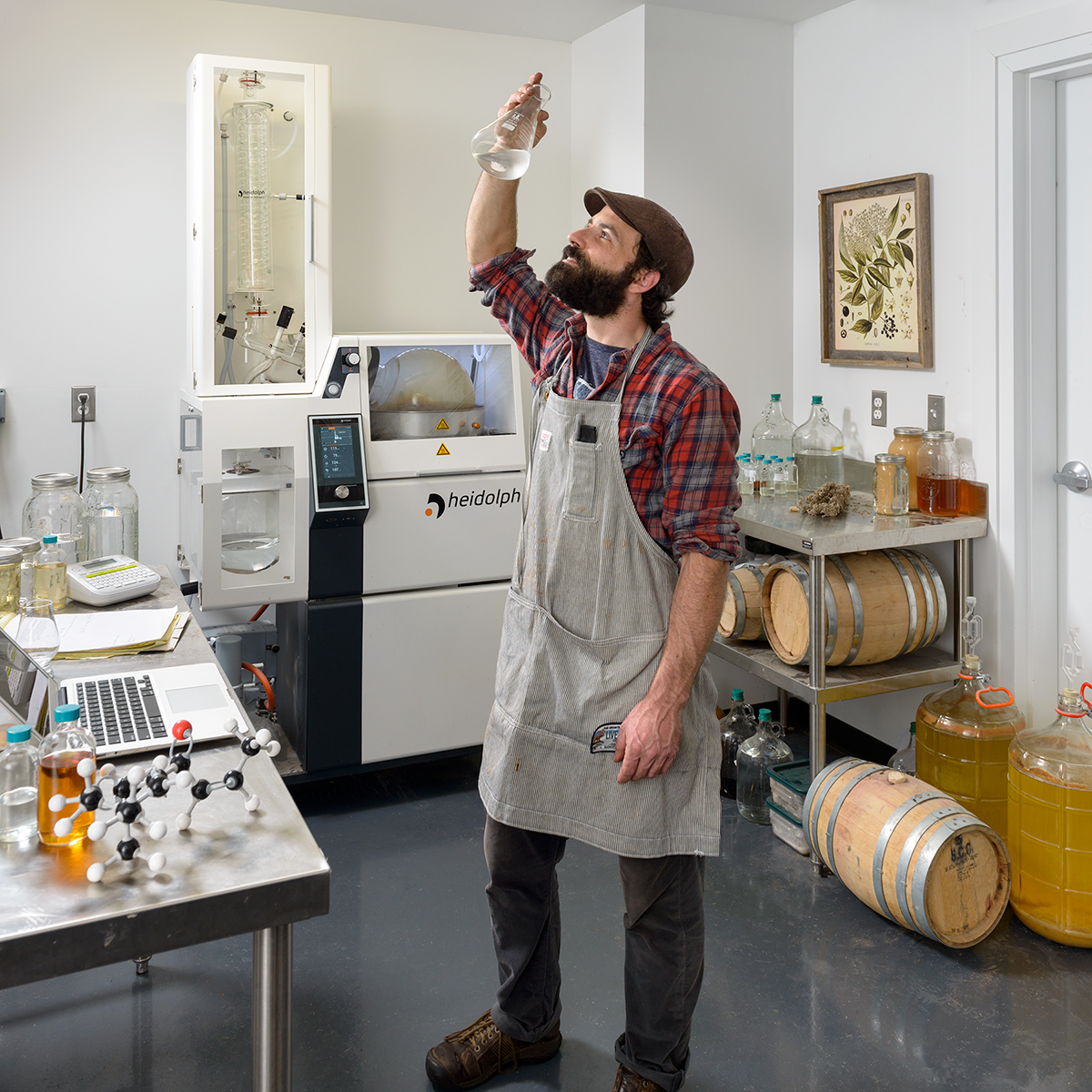 Matt Power checks the purity of his distillate.

When it comes to distilling, water quality is everything. Steven, who summered in Meredith as a kid, was drawn to Tamworth for its exceptional water drawn from the Ossipee aquifer. As Steven puts it, “You can’t frack in granite.” Tamworth’s strong New England culture was yet another draw.

Housed in a sturdy, new, sage-green building near the center of town, the distillery is built on the site of the former Tamworth Inn. Next door is a new, handsome, dark red Victorian building that repurposes dramatic architectural features from the old inn; there are plans to transform it into a farm-to-table restaurant.

The distillery features a central, square tasting bar to showcase their dozen or so brands. Customers can sip, visit, muse on one taste and then another. Handsome bottles with beautiful labels and recipe cards are displayed around the room along with Steven’s recent book, Colonial Spirits: A Toast to Our Drunken History, which irreverently explores Colonial drinking habits, recipes, remedies and tonics. The distillery even sells a do-it-yourself base alcohol, The Good Reverend’s Universal Spirit (RUS), for those customers who want to try their hand at their own spirit infusions.

At the tasting bar, Director of Operations David Grasse, Steven’s brother, pours a small glass of Apiary Gin, one of their bestsellers.

It’s all heart, as a true distiller might say, and smooth from the get go.

David smiles and says: “We’re well known for our seasonal gins. This is our summer gin made with local honey, balsam poplar buds and pine rosin. Our Flora Gin is made with juniper and local flowers. We also have a fall Wild Hops Gin and a winter Spruce Gin.”

At the moment, most of Tamworth Distilling’s products are unaged, since whiskies require anywhere from two to four years to age. “We have about seven thousand gallons aging in our barrelhouse now,” David says. “But we’re pretty excited about our newly released Camp Robber Whiskey, a sixteen-month bourbon made from organic corn and rye. It’s combined with apple brandy and fresh apple cider. Our cider comes from Carter Hill Orchard in Concord. We think it will present a new interest in brandies. It’s like the next step from bourbons and whiskies.”

Close by are distillers Jamie Oakes and Matt Power. They grew up in the area, then left to study and pursue careers. When presented with opportunities to help create a unique craft distillery, they both chose to return.

Oakes, with support from Tamworth Distilling, studied at Moonshine University in Louisville, Kentucky. It seems that all things whiskey originate in Kentucky. Anyone who drinks whiskey certainly likes a Kentucky brand or two. The white-oak barrels that by law whiskey must age in are manufactured in Kentucky, as is the distillery’s custom-built Vendome, the huge copper “kettle” used by craft distillers. This one has a brandy helmet, whiskey column, gin basket and rectifying column. Oakes commenting on the Vendome’s versatility, says, “It’s like a Swiss army knife.”

Oakes has been instrumental in sourcing and creatively identifying local ingredients, reaching out to local growers and UNH Cooperative Extension experts. And, of course, contributing to recipes. Like any kind of cookery, good, fresh ingredients make all the difference.

Power, an organic chemist, was immediately at home creating spirits. The distillery is really a big laboratory with its manufacturing equipment, smaller lab facility and test kitchen where he and the team can further finetune and create their recipes. He likens the process to musical composition, adding tones and notes of flavors. Since the distillery is a craft distillery, Power has the luxury of working with the best of the “spirit run,” which is when flavors are added to the alcohol. The beginning of the spirit run is known as the head, and the end is known as the tail. Both the head and tail can have a rougher taste. It’s the middle of the spirit run—known as the heart—that’s smooth and warming.

A few more sips. This time some Tamarind Cordial. It’s a “liquid modifier” as a mixologist might say and pairs well with tequila.

Whenever possible, the team sources ingredients locally, defined as a 150-mile radius. Honey and maple syrup are produced just down the road. Wild cranberries were foraged from a local bog. Beets came from White Gates Farm in Tamworth, and thyme from Mountain Heartbeet, LLC in Effingham. When local,wild blueberries could not meet the distillery’s demand, the team turned to Burke Hill Farms in Cherryfield, Maine. With recommendations from UNH Cooperative Extension, the distillery found sweet potato varieties
for northern climates. For balsam poplar buds, a Coos County extension forester guided the distillery to accessible stands. And for small fruits and berries, a Carroll County extension expert put the distillery in touch with a hobbyist, who has fifty varieties of apple trees, and a researcher working with Siberian kiwi fruit.

Grains, essential to whiskey, present more of a conundrum. At the distillery, fresh grains are milled onsite. However, most New Hampshire farmers haven’t grown grains for generations. But that may change. Recently in Coos County, farmers working with Cooperative Extension have successfully grown triticale, a wheat and rye hybrid.

A look at the industry

Small distilleries have cropped up all across the country. There are more than 1,300 craft spirit producers in United States as of August 2016, according the American Craft Spirits Association.

In a few short years, Tamworth Distilling’s vodkas have routinely won top awards from the American Distilling Institute and the San Francisco World Spirits Competition. Between ten thousand and twelve thousand people visited the distillery in just the first year. Even English gin makers have come to visit. At the fourth Distiller’s Showcase held last fall in Manchester, more than four hundred spirits were represented. 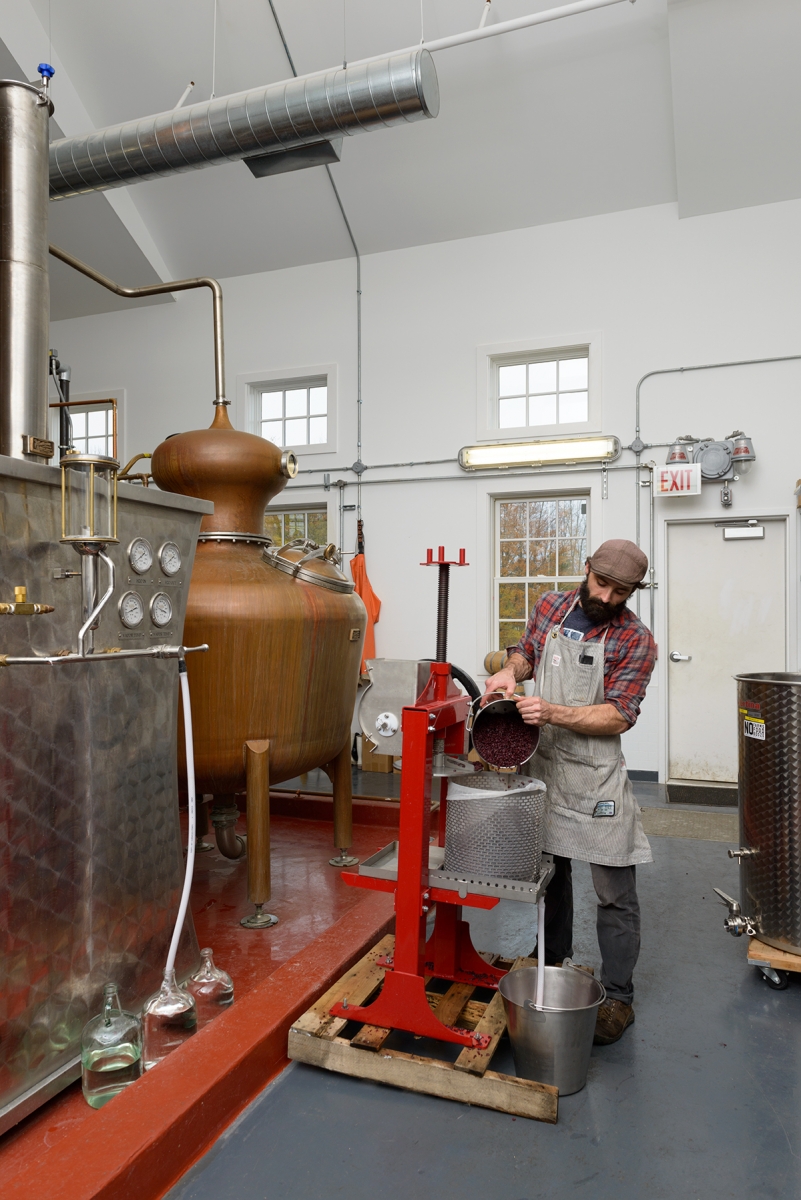 Tamworth Distilling is offering a pairing dinner at the Wolfeboro Inn on March 5. On March 26, there is a Taste of the Lakes Region tasting at Church Landing at Mill Falls in Meredith, and another tasting at the White Mountain Hotel in North Conway on March 31.

Tamworth Distilling brands are available onsite; in select outlets in Boston, New York City and Philadelphia; and at any of the eighty New Hampshire Liquor & Wine Outlets. Of the seventeen alcohol beverage control (ABC) states in the country, New Hampshire is ranked third for bourbon sales, according to the Breaking Bourbon website. So, with outlets’ patrons accustomed to buying the best, once Tamworth Distilling’s spirits come of age, they’ll compete with titans.

Staying true to Steven’s philosophy, soon after the distillery got under way, Tamworth Distilling took measures to protect that precious water resource and implemented a thirty-thousand-gallon cistern to chill the equipment. After the cistern was installed, the distillery’s usage went from between three thousand and four thousand gallons a day to just six hundred gallons a day, the equivalent of a six-bedroom house. David notes, “We’re very proud of that accomplishment.”

Here are some of Tamworth Distilling’s favorite cocktails made from their spirits. 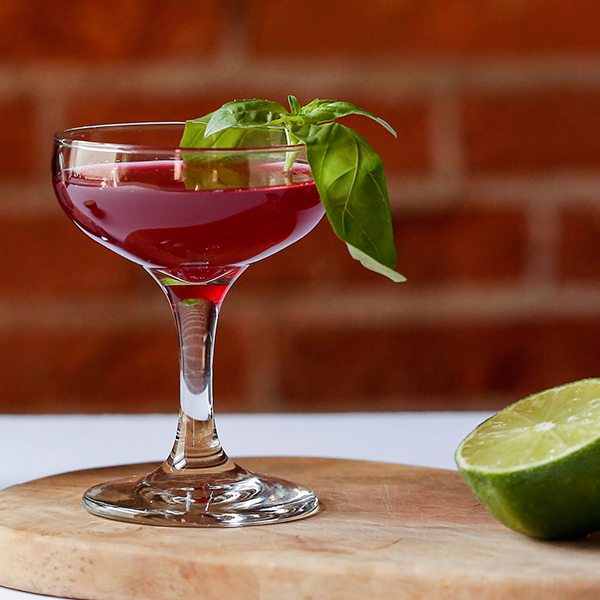 2. Add ice, gin and AITA Black Trumpet Blueberry, and shake. Strain into a chilled coupe glass, and garnish with a basil leaf. 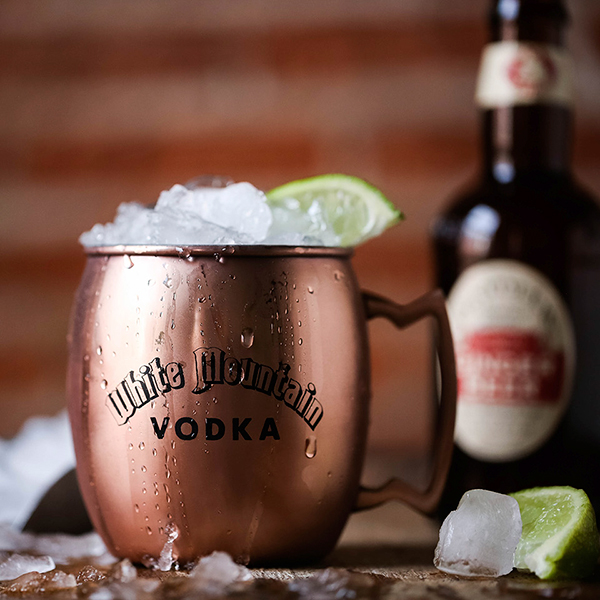 2. Top with cold ginger beer and stir. Garnish with a lime wedge. 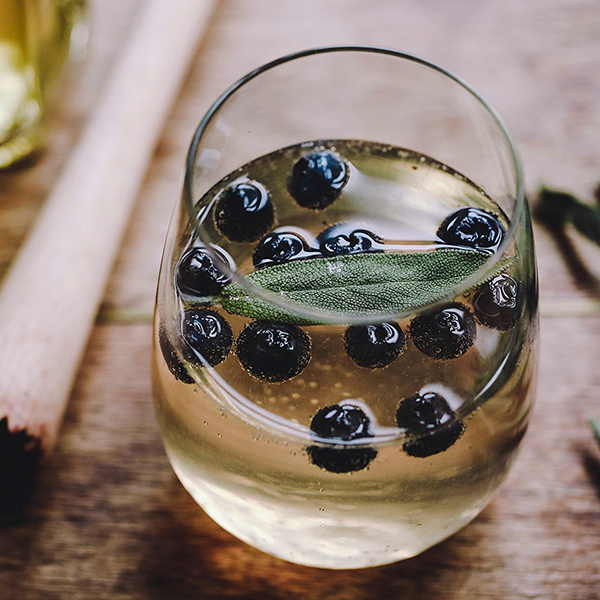 1. Muddle 5 blueberries and Apiary Gin in a mixing glass. Add ice, stir, and strain in a chilled glass.

2. Top with pear soda and garnish with 3, or more, fresh blueberries. 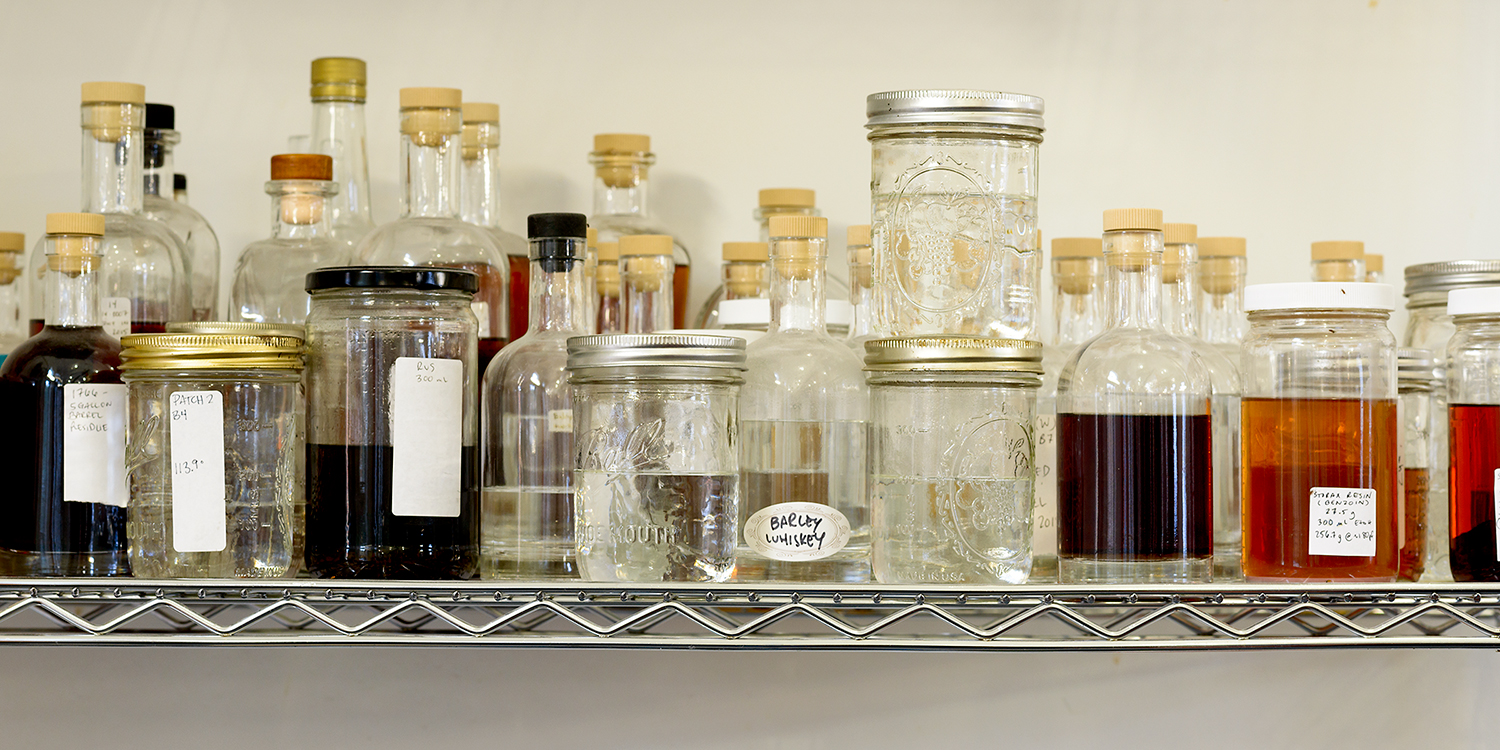 Lemon verbena, chamomile, lavender and coriander are just some of the herbs grown on site and used to flavor the spirits. 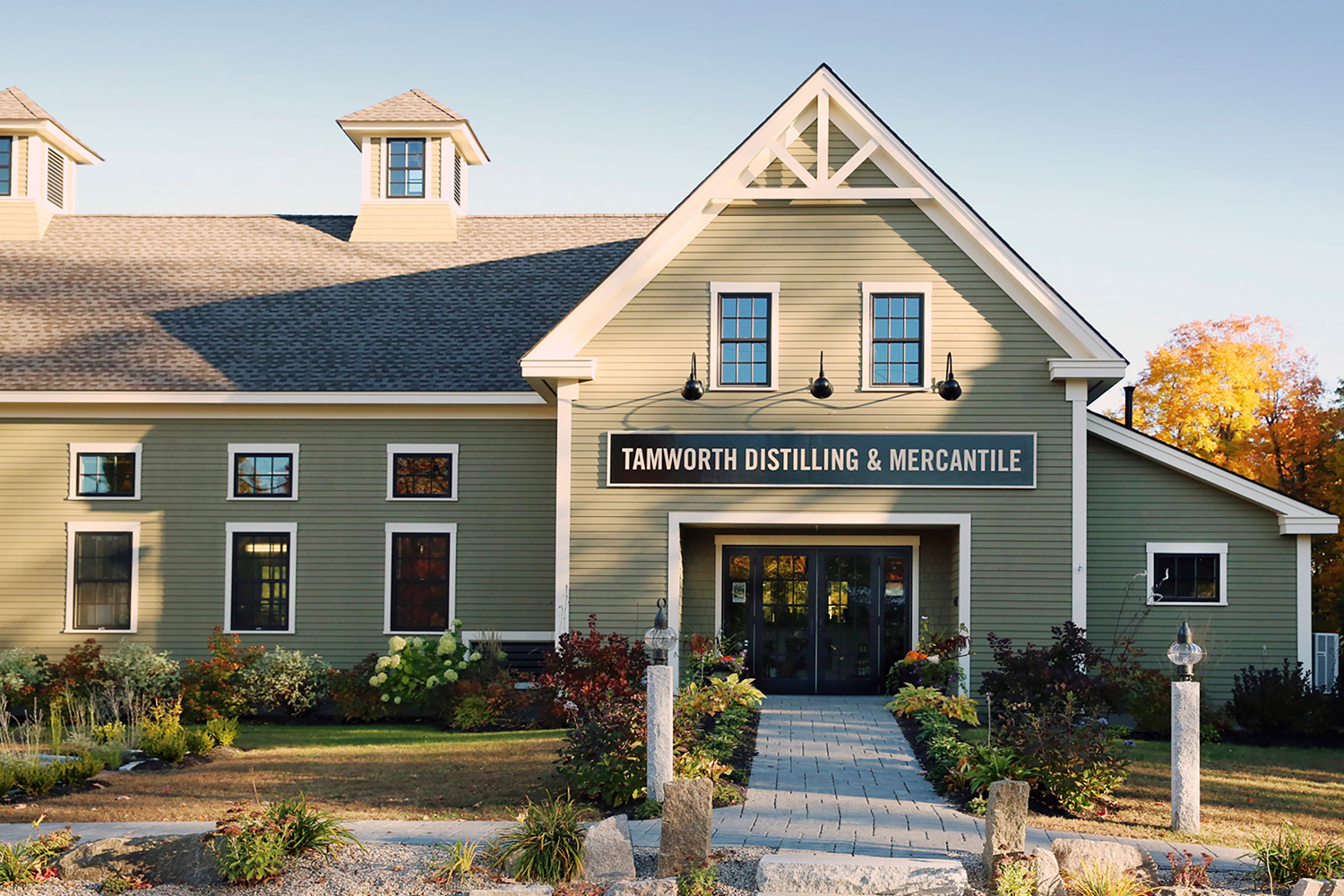 Right on the main street, the distillery’s address is 15 Cleveland Hill Road in Tamworth. 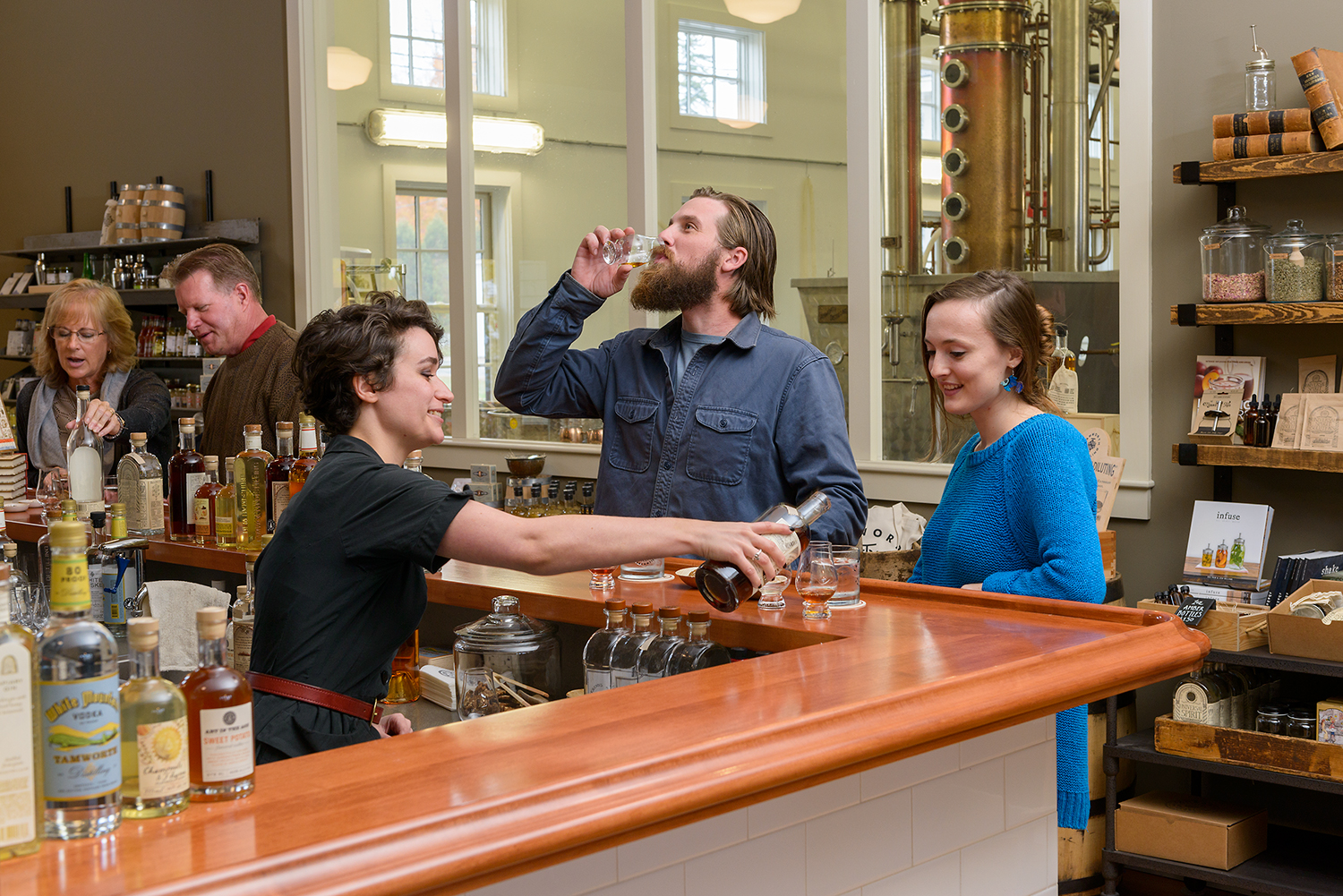