Cultivating a Taste for Herbs

For a very special farm-to-table lunch and a tour of beautiful gardens, visit Pickity Place in Mason. 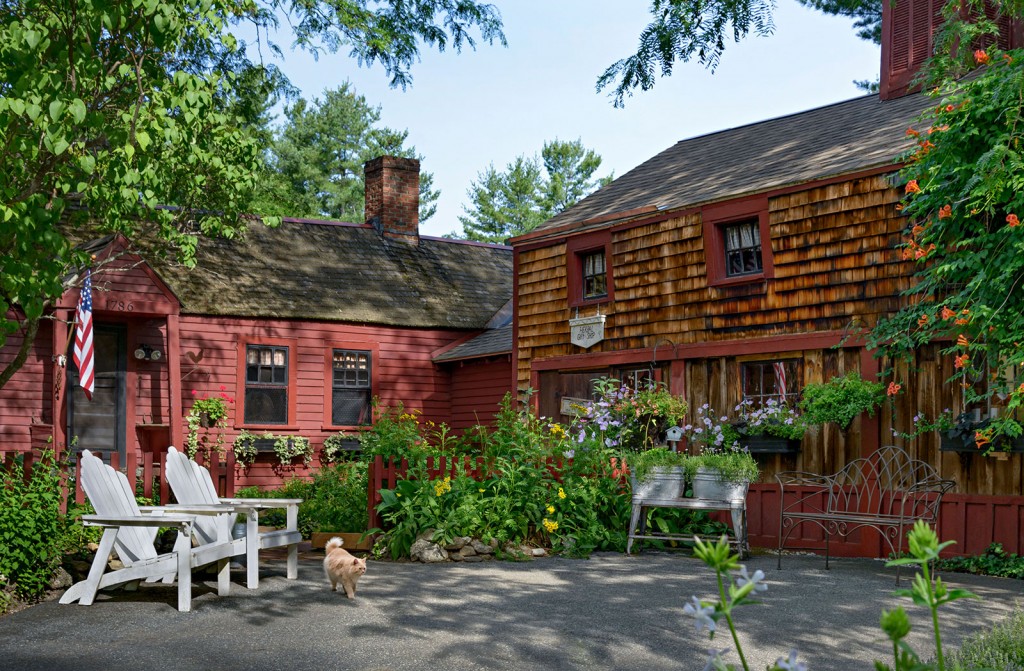 Over the river and through the woods, eventually you will reach Pickity Place in Mason—and it is like stepping back in time. In the summer, flowerbeds are filled to overflowing and there are many themed gardens loaded with herbs. A brick-paved courtyard leads visitors to the dining room and Little Red Riding Hood Museum in the 1786 red Cape; the rustic gift shop is in the attached carriage shed.

Spice up your life by adding some new culinary herbs to the menu. Parsley, sage, rosemary and thyme may have been something to sing about in the sixties, but now it is all about the basil, cilantro, lavender and mint. Have you tried summer savory, lemon verbena or salad burnet? And then there are the edible flowers—many are delicious as well as decorative! Calendula, borage, violets, mallows and nasturtiums add pizzazz to your plate, elevating an everyday meal to gourmet status. 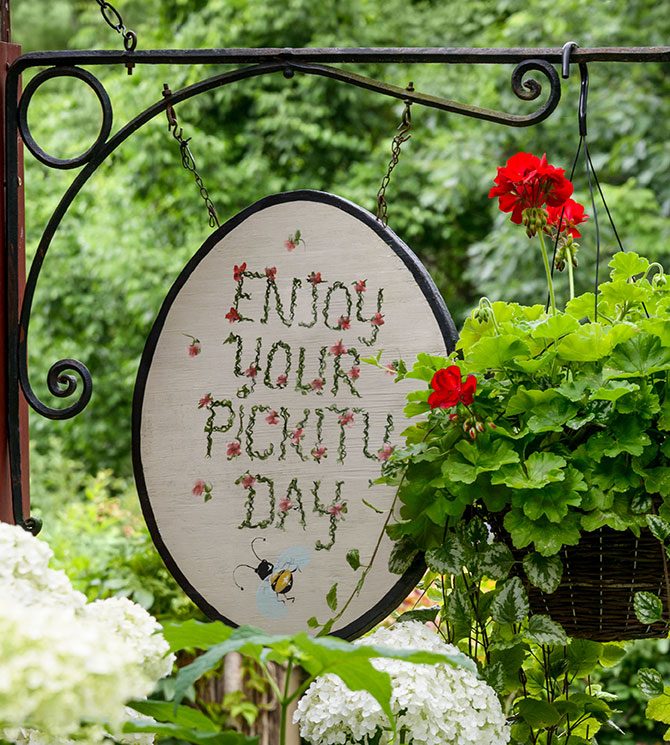 A trip to Pickity Place is a perfect way to celebrate the arrival of spring! Pickity Place is open year round, seven days a week: 10 a.m.–4 p.m. January through March; 10 a.m.–5 p.m. April through December. They are closed on New Year’s Day, Easter, Thanksgiving and Christmas.

Along with the delicious food and beautiful gardens, there is a fabulous gift shop, an extensive greenhouse and the Little Red Riding Hood Museum.

Pickity Place is located at 248 Nutting Hill Road in Mason. For directions, more information and the monthly menu, go to pickityplace.com.

The restaurant at Pickity Place in Mason is known for its use of fresh herbs and edible flowers in their five-course gourmet meals. It takes a bit of advance planning but most of these herbs and garnishes are grown right on the premises in Pickity’s extensive gardens. Owner and chef Keith Grimes plans his menus six months in advance, coordinating with head gardener Carol Iodice to make sure the necessary plants will be available. Along with the herbs used, every entrée gets an edible flower garnish. “In summer, we probably pick one thousand herbs and flowers a day,” Iodice says. Things like lavender, lime balm and mint are used to flavor drinks. Dill goes into a dip, and salads may include lovage, bronze fennel or frilly-leaved red basil.

Pickity Place opened as an herb farm in 1976. The antique, red Cape dates from 1786 and was the model for artist Elizabeth Orton Jones’s illustrations in the Little Golden Book 1948 edition of Little Red Riding Hood. In the house, there is a space dedicated to all things Red Riding Hood. Take a peek into grandmother’s bedroom—who is that under the covers? Since many visitors requested that Pickity also serve food, a restaurant was added in 1981. They offered a unique menu based on the festival of the month and its accompanying herb. “We are the original farm-to-table restaurant,” Grimes says. He started there in 1995 as chef and eventually bought the business in 2000 when the original owners, Judy and David Walter, retired.

“The flavor of dried herbs is nothing compared to fresh,” Grimes says. The best way to become familiar with fresh herbs is to grow your own and experiment with them. If you are wondering where to begin, look around your kitchen and start with the herbs you use most often. Iodice recommends beginning gardeners start with transplants rather than seeds. “The plants won’t need as much babying, and you’ll get faster results,” she says. 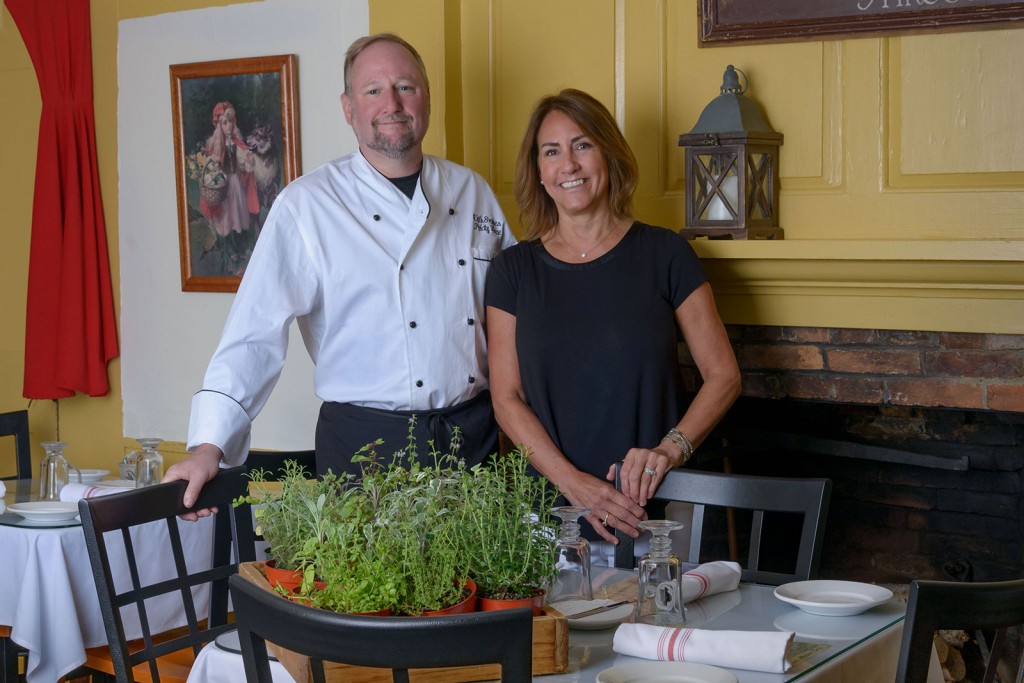 Owner and chef Keith Grimes and his wife Kim are your hosts when you visit Pickity Place. The seasonal menu changes monthly, and there are three seatings in the restaurant every day at 11:30 a.m., and 12:45 and 2 p.m.

Although having a pocket garden of herbs by the kitchen door is handy, they don’t have to be grown in a separate space. “Many of these plants do fine mixed with your flowers and vegetables,” Iodice says. “Thyme is a nice border plant, and sage can be planted alongside your other perennials.”

She cautions about mints, though. “They are fun, but be careful. Mints can be invasive so they need to have their roots contained. Grow them in a box rather than in the ground,” she says. “There are so many different flavors of mint for you to try. They are wonderful used in drinks or desserts—chocolate mint is really yummy and smells like a peppermint patty; strawberry or pineapple mint are delicious with fruit or infused in water.”

If your garden is shady, Iodice suggests growing salad burnet. “A perennial, it has a cucumbery flavor and tastes best when harvested in spring,” she says.

Basil, on the other hand, is an annual, needs lots of sun and grows well in the vegetable garden. “There are many types of basil to choose from depending on the look and flavors you prefer: lemon, Thai, cinnamon, Genovese, opal, lettuce leaf or ruffled,” Iodice says.

For something different, try lovage. “It gets really tall, and looks and tastes like celery,” Iodice says. “It is good in soups and salads, and is our sous chef Matt Comeau’s favorite.”

Rosemary is another popular herb, but since it is not hardy in our area, Iodice recommends growing it as an
annual. “Some folks try to winter it over indoors in a pot, but it is grumpy and hard to grow in the house. Just let it go and buy a new plant in the spring,” she says.

Flat-leaf parsley is a must; Iodice thinks it has better flavor than the curly leaf type. 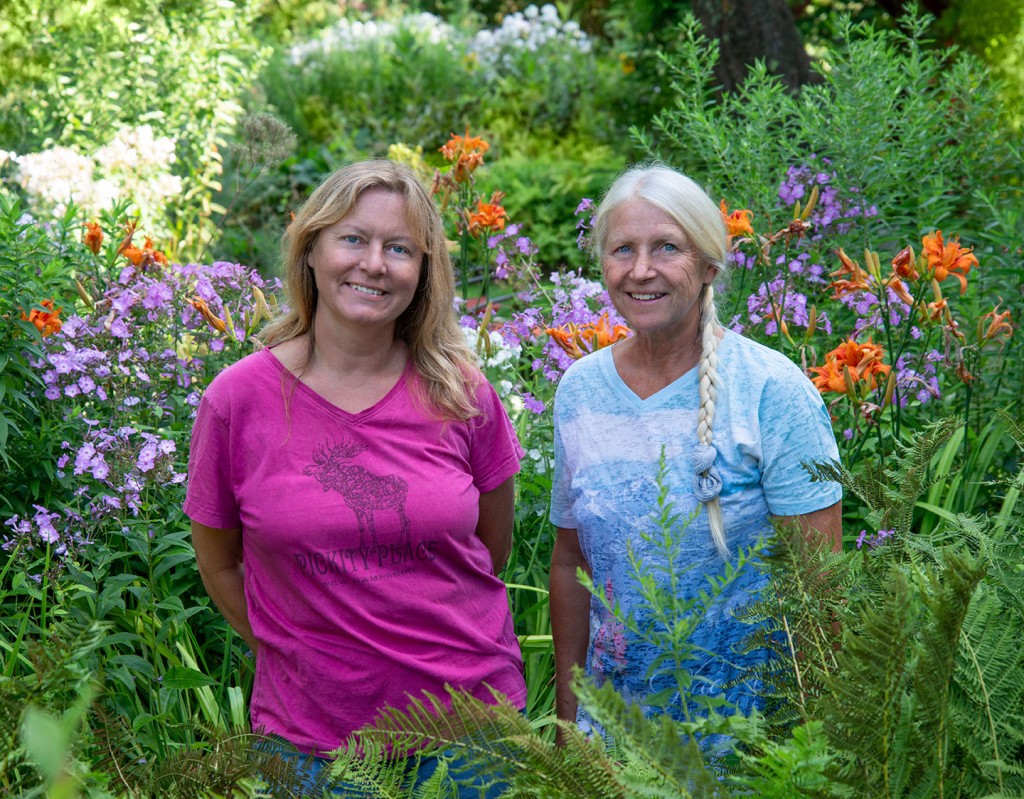 Head gardener Carol Iodice (right) and her assistant Linda O’Grady (left) start work early in the spring
to spiff up the gardens and get them ready for the season ahead.

Pickity Place has a long hedge of perennial lavender, which gets used daily in season to make lavender lemonade. Iodice says the trick for successful lavender is good drainage. “The roots will rot easily if left in soggy soil,” she says. “Ours is banked up.” She also recommends being patient in the spring. “It may look dead early on, but don’t be in a rush to pull it out. Leave it until June and watch for new sprouts.”

Along with basil, other annual herbs that are easy to grow include cilantro, fennel and dill. “We use a lot of dill. It is really good in dip, soups and salad dressing,” she says. “Fennel has a licorice flavor that is good on a lot of things.” She says herbs love to be touched, so don’t be afraid to handle them. “They love to be used. The more you cut them, the better they grow.”

Iodice starts plants in the Pickity greenhouse beginning in late February to early March, using both seeds and plugs. To keep up with demand for spring plants, Pickity Place also purchases about 360 plants a week from another grower. In addition to Pickity’s mints, thymes, basil and lavender, this is the place to purchase hard-to-find or unusual plants, such as patchouli, stevia, mugwort or sweet cicely. “Herbs are easier to grow than a lot of perennial flowers,” Iodice says. “If they are getting too big for their space, you can cut them back or rip out some of the roots. They are tough and can take it.”

If you have any questions, Pickity’s greenhouse manager and gardeners are all very knowledgeable and eager to help.

While there, be sure to check out the wheel of thyme—who knew there were so many different kinds? You can never have enough thyme! 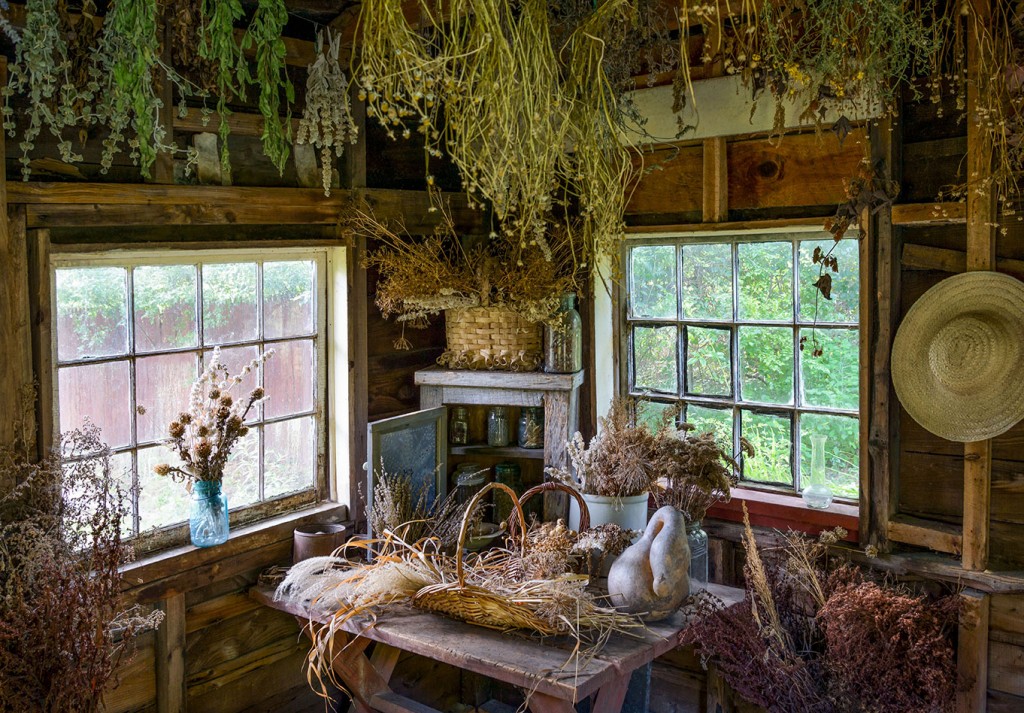 Dried bundles of herbs and everlasting flowers harvested from the gardens hang from the rafters in the drying shed.

Since the menu changes monthly, Grimes says it is like opening a new restaurant every month. Pickity Place offers a five-course, fixed-price, gourmet herbal luncheon, which includes a drink, dip and crackers appetizer, soup and bread, salad, two choices of entrées (meat or vegetarian), and dessert. “People love the simplicity of it. You don’t have to decide, you just eat what I give you,” Grimes says. “It is comfortable and relaxed, and takes you back to when life was simple.”

Pickity Place is located off the beaten track, down a back road in Mason. Part of the fun of going there is finding the place! “We have beat all the odds,” Grimes says. “We have a terrible location and offer a limited choice of food, yet people flock here. They will make a special pilgrimage to come and eat here.”

There are many repeat guests, and the staff has made many friends over the years. “People have formed an attachment, and this is like a homecoming for them,” Grimes says.

Grimes is especially flattered when other chefs dine at Pickity. “Celebrity chef and cookbook author Sara Moulton eats here! It is a real compliment when chefs come here to eat.” 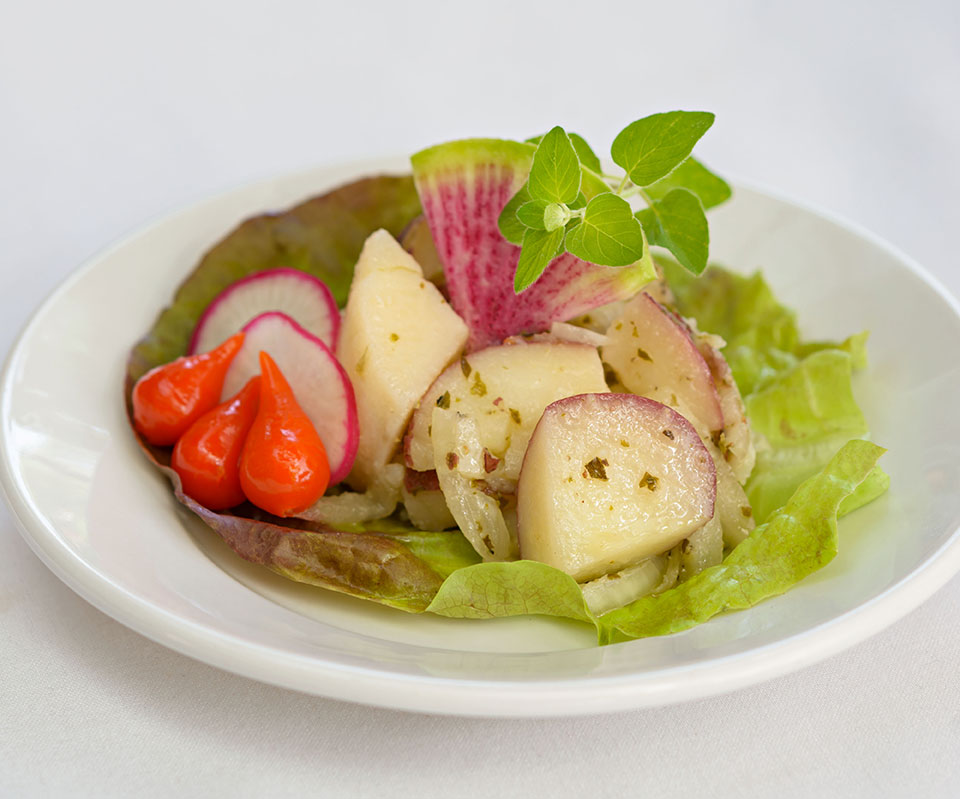 Chimichurri is a staple in Argentina, used most frequently on grilled meats. “Why not take chimichurri and add it to our traditional summer favorite potato salad?” Pickity Place owner and chef Keith Grimes asks.