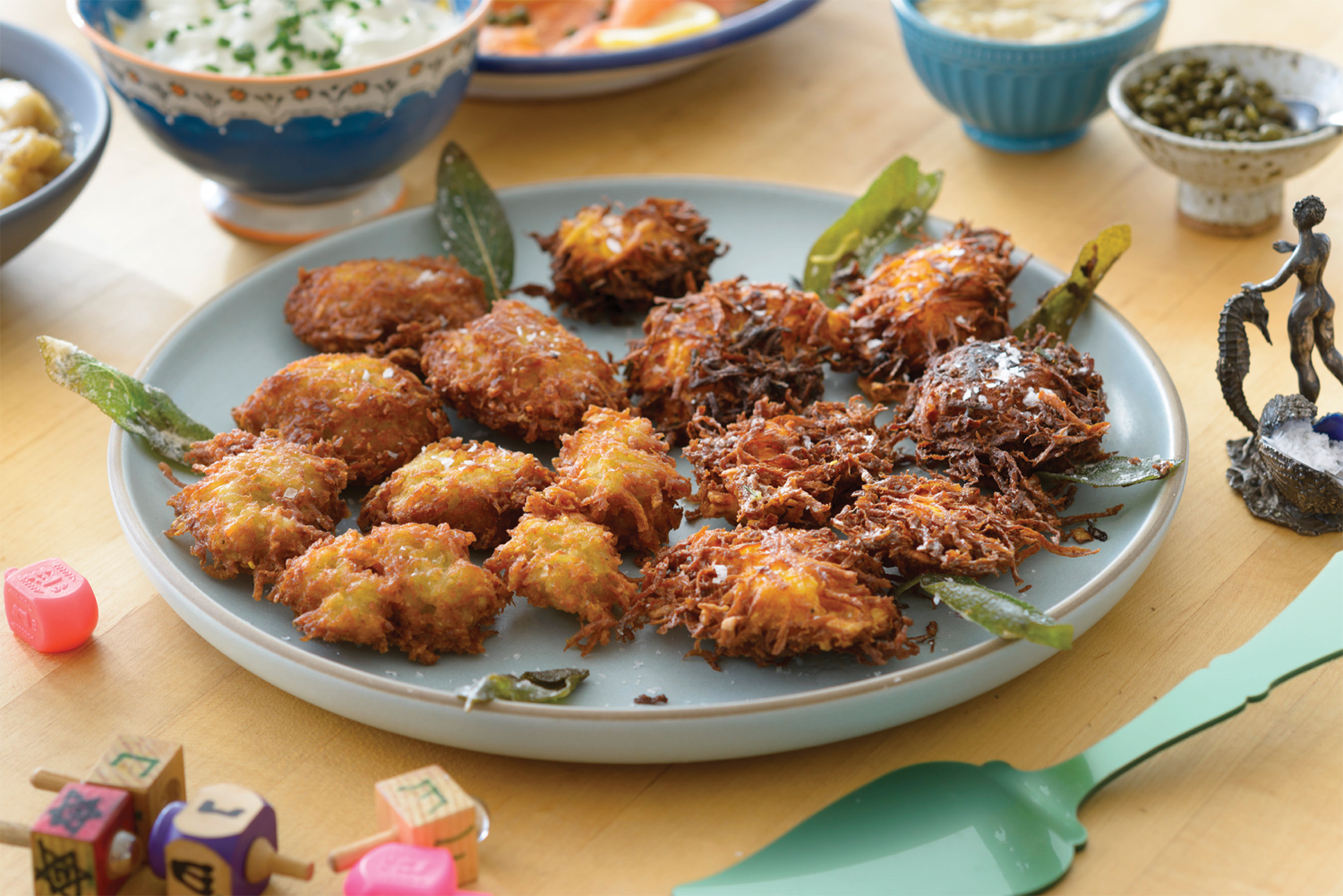 Here’s a collection of latkes (fried potato and root vegetable pancakes) that makes use of the best winter produce: sweet potato and shallot latkes (on the right of the plate) and John’s Traditional Latkes (left), surrounded by toppings like horseradish, capers, smoked salmon, sour cream and more. See recipe links below.

It’s mid-December, 4:00 in the afternoon (or is it evening?), and the kitchen windows look out onto a dark, ominous landscape. The forecast: strong winds and a high of 12 degrees. The first night of Hanukkah falls on a different day every year (according to the Hebrew calendar, this eight-day festival is celebrated between the twenty-fifth day of the month of Kislev to the second day of Tevet), but almost always comes during the shortest, darkest days of December.

The holiday is about celebrating and remembering religious freedom. Candles are lit each night on the menorah (a traditional candelabra of sorts), prayers are spoken, songs sung, dreidels spun, and families and friends gather around the light.

Hanukkah can in no way compete with Christmas (honestly, can anything?). But it’s not meant to; Hanukkah isn’t considered one of the major Jewish holidays, but it is one that Jewish families look forward to all year. One of the reasons is the food. The menu focuses on fried foods, comfort foods and ingredients that celebrate the winter season.

Why does the Jewish tradition suggest that we eat foods fried in oil?

I asked Rabbi Robin Nafshi, of Temple Beth Jacob in Concord, to explain. ”This [tradition] connects back to the story from when the Jews rededicated the Temple in Jerusalem desecrated by the Assyrian Greeks in 165 BCE. Instead of only lasting one day, the oil used to light the Temple’s ner tamid (eternal light) miraculously lasted eight days,” Rabbi Nafshi says.

The most popular Hanukkah food is latkes, or potato pancakes. Made from grated potatoes, egg and a touch of flour (sometimes grated onion), the pancakes are fried in hot oil until they are golden brown and crisp on the outside, and tender and soft inside.

Tradition and ritual are what holidays are all about, but, as a cook and food writer, I love to create new riffs on classic foods. So this year, I decided to try several variations on the theme of latkes. I experimented with latkes made from grated winter carrots and ginger, parsnips and chives as well as with sweet potatoes and scallions. I’ve also made latkes from sweet grated beets, butternut squash, celery root and red onion. The possibilities are endless, but the method is pretty much the same for all the pancakes: grate the potatoes or root vegetable; add an egg, a touch of flour and some spices; and fry. 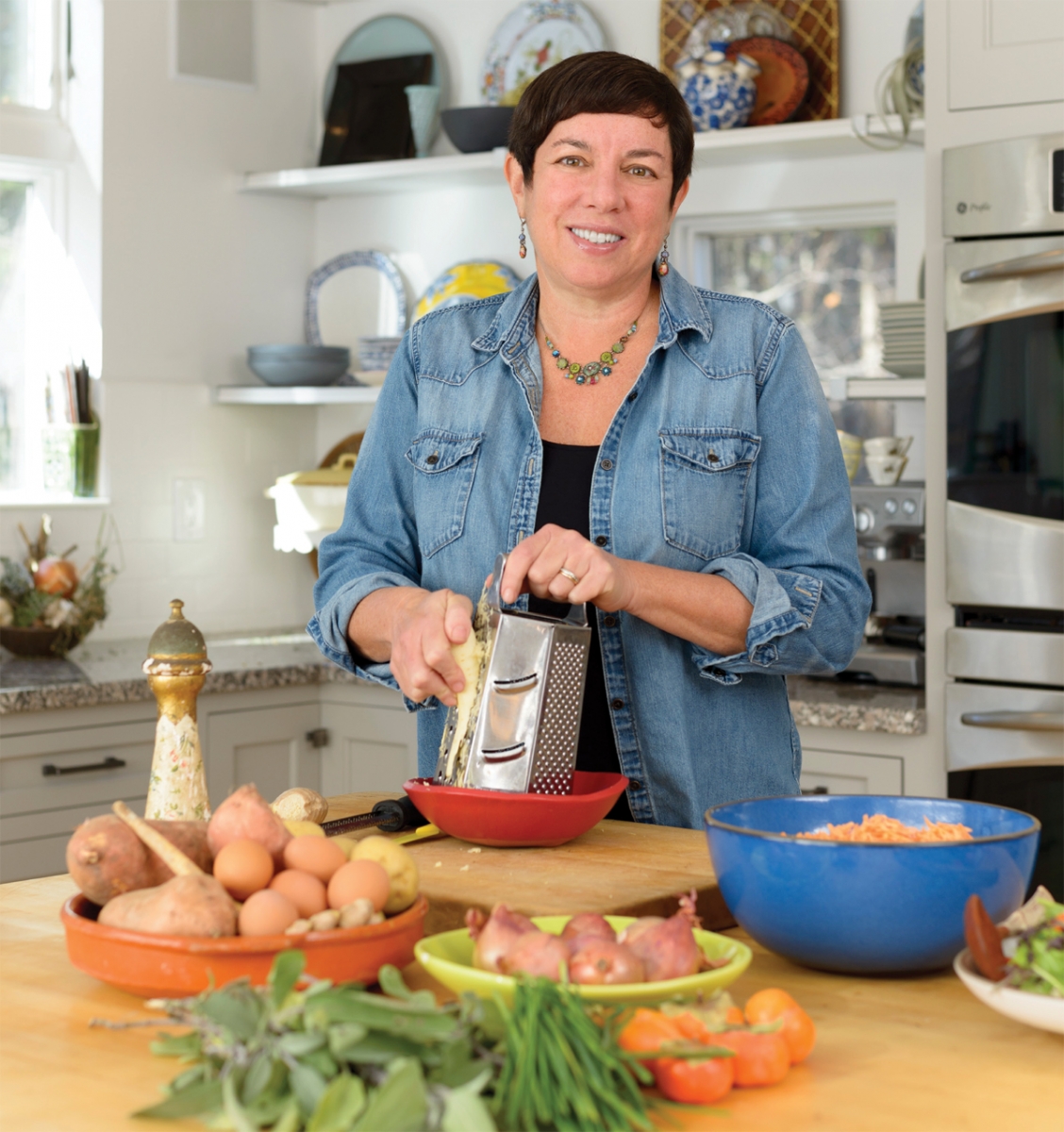 Cookbook author Kathy Gunst grates potatoes for her Hanukkah latkes in her kitchen.

The real trick is to make sure your oil is hot enough so that the pancake cooks perfectly without absorbing any oil, but not so hot that it burns. It’s a delicate balance of finding just the right degree of hot. (A trick: place a speck of flour or a grated potato into the hot oil; if the temperature is right, the flour or potato should sizzle right up without burning!)

Then the latkes must be drained on paper shopping bags or several layers of paper towels. They will keep for a short period of time in a low (250°F) oven, but it’s best to eat them hot and just out of the skillet. And don’t even pretend you’ll only have one or two; latkes are so delicious, you’ll want a whole stack.

In terms of toppings for latkes, you can go the traditional route: sour cream and horseradish. I also like to make my own roasted applesauce (slices of apples and/or pears are roasted at high heat and mashed right in the hot roasting pan). But there are all kinds of creative accompaniments. Make an assortment of latkes and place all kinds of toppings on the tables so everyone can mix and match their own: in addition to the horseradish (white and red beet), sour cream and applesauce, think about bowls and platters of smoked salmon or trout; lemon wedges; freshly chopped dill and minced fresh chives; crème fraîche; red caviar roe; pomegranate seeds; or seasoned sea salt.

As darkness envelops the house, and family and friends gather around the table, the ideas of winter and the cold snowy days and nights to come suddenly seem less ominous and more inviting.

Toppings for latkes, dreidels and a menorah are the makings of a family Hanukkah.

Any of the latke recipes here work with any or all of these toppings.

Kathy Gunst and her family like to add a dollop of sour cream to one, and then a dollop of applesauce to the next, and then the chutneys (for example), so everyone gets a little taste of everything. 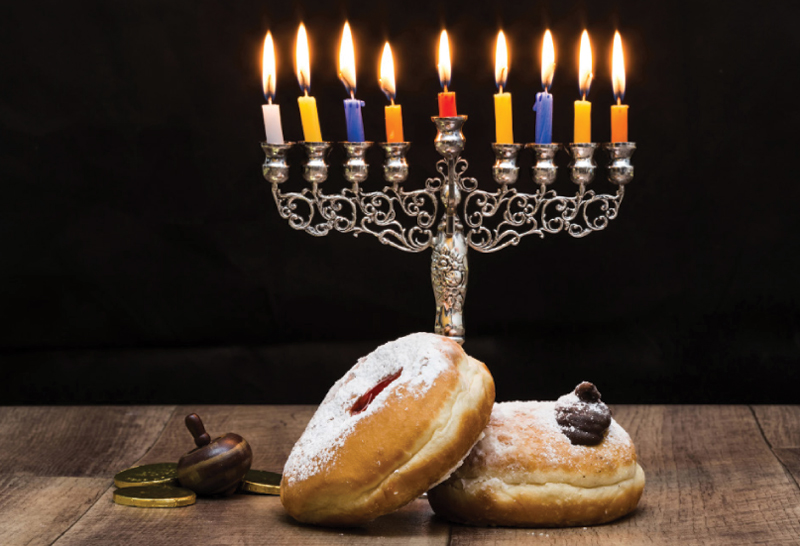 Another Hanukkah tradition is frying up sufganiyot,  or jelly doughnuts. This Israeli tradition involves a yeast-risen dough, formed into round doughnuts, fried until golden brown, stuffed with fruit preserves or custard, and finally sprinkled with powdered sugar. The word sufganiyot derives from the Hebrew word for sponge. When done right, the doughnuts are light, fluffy and golden brown—the perfect, sweet, fried ending to the traditional Hanukkah meal.