Valicenti Pasta Farm uses only locally grown ingredients in its products, all made in Hollis. 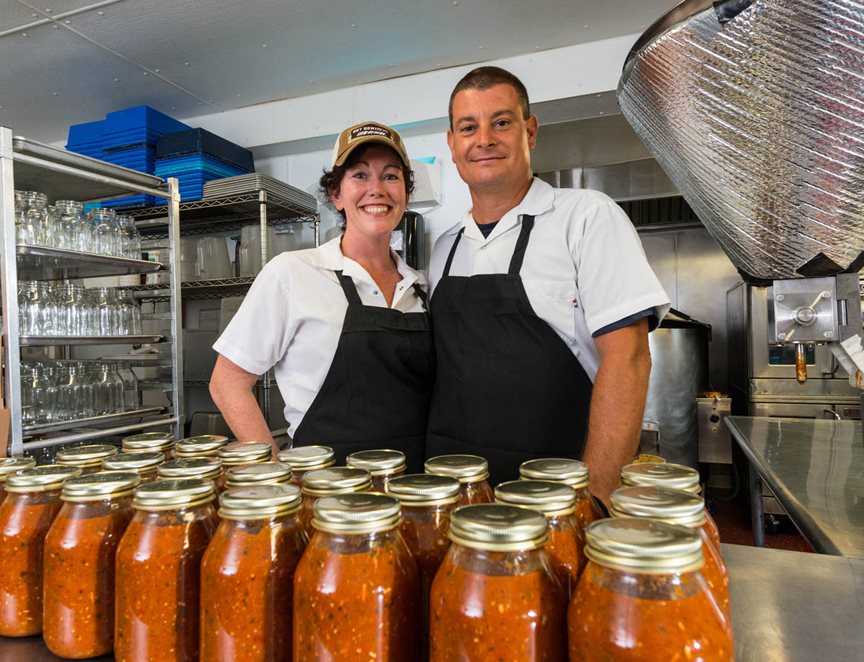 David Valicenti is the consummate small business owner, wearing multiple hats at any given time. Today, he’s taking a call on his cell phone, a quick respite from fixing a broken well on the Hollis farm that’s home to Valicenti Pasta Farm (formerly Valicenti Organico), the burgeoning gourmet pasta and sauce business he owns with wife Michelle. “Something’s always broken on a farm,” he says good-naturedly.

Valicenti Pasta Farm, however, is working just fine. When he’s not farming, David—a former chef—is dreaming up creative ideas for the company’s line of sauces and fresh pasta, like wild garlic scape linguine or asparagus and brie ravioli. David might also be found in the on-site greenhouse, checking on the vegetables and herbs used in his creations. Michelle, a former pastry chef, supervises operations and works with the growing number of farmers’ markets in New Hampshire and Massachusetts where Valicenti Pasta Farm sells its products. “When I run into friends and they ask what I’m doing, I almost don’t want to answer because we’re doing so many things: cooking, growing and selling,” David says.

Their path to the present 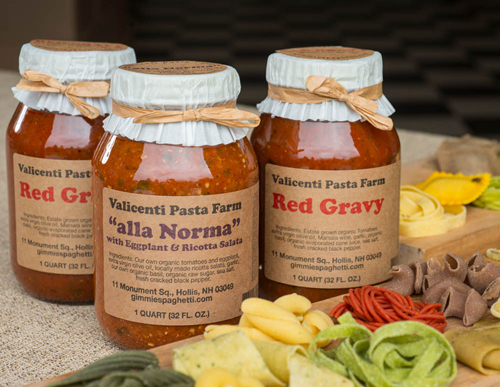 The Valicentis’ pasta sauces are the cornerstone of Valicenti Pasta Farm

Valicenti Pasta Farm is a natural extension of the couple’s respective culinary experiences.

David grew up in Hollis, in a white house across the street from the 1870s-era red barn that houses Valicenti Pasta Farm and the yellow farmhouse he and Michelle live in. He grew up cooking. “I’m Italian, and we had a huge oversized garden,” he says. “We made everything ourselves,from our own wine, to cooking and canning vegetables from the garden.”

A self-described graduate of “the school of hard knocks,” David worked in restaurants starting as a teen and eventually moved to New Orleans, Louisiana, where he kicked around the local restaurant scene for thirteen years. He moved back to New Hampshire right before Hurricane Katrina devastated the city in 2005.

Michelle, originally from Billerica, Massachusetts, also has a culinary background and graduated from the Culinary Institute of America in Hyde Park, New York. The duo met at Michael Timothy’s Bistro and Wine Bar in Nashua, where David was chef de cuisine and Michelle was the pastry chef.

Valicenti Pasta Farm started with a bumper crop of tomatoes at the Valicentis’ farm. David decided to turn it into several hundred jars of pasta sauce he calls tomato “gravy.” They traveled to a local fall-harvest festival to sell their new product. “We sold out almost immediately,” David remembers. The next weekend, they tried selling the sauce at a local farmers’ market. It sold out again.

The couple put the money they made from initial sales into buying glass jars, labels and olive oil. The Valicentis used their garage for the jarring process. Eventually, they had enough money to turn the apple barn on their property into a commercial kitchen and production facility. Using pasta machines they bought at auction, they started making pasta and ravioli. Valicenti Pasta Farm products are now available at more than twenty-five farmers’ markets in the Boston, Massachusetts, area as well as in southern New Hampshire and the Merrimack Valley.

The Valicentis use their culinary intuition and cooking skills, not family recipes, to develop their pastas and sauces. Inspiration also comes from the between fifteen and twenty crops the Valicentis grow on the farm— everything from tomatoes, eggplants and sweet potatoes to arugula, chard, kale, broccoli, spinach, beets and carrots, plus “basil and every herb imaginable,” David says.

All the herbs—and most of the vegetables and the grains—used in pastas are sourced from the farm; cheeses, meats and seafood are from local farms and producers.

David’s creativity is evident from glancing at the products Valicenti Pasta Farm offers: delicious pastas, such as garlic-based linguine, truffle wild mushroom ravioli, even grilled ramp and pea tendrils ravioli. There are also sweet summer offerings, such as grilled peaches and basil ravioli, one of David’s favorites, or native strawberries with chèvre and cracked pepper. “I love creating ravioli with a fine-dining influence,” he says. “We’re very nouveau that way.”

The company still makes its trademark tomato gravy and other pasta sauces in small batches. Flavors include tomato basil with Marsala wine; olive oil and garlic; and Alla Norma, a Sicilian favorite made with eggplant, tomato and basil. “It’s like eggplant Parmesan in a jar,” David says.

The future looks bright. Valicenti Pasta Farm expects to reach $1 million in sales this year, and employs a staff to help with planting, harvesting and farmers’ market sales. David’s mom even helps out occasionally, tying ribbons on packages.

The Valicentis hope to expand their restaurant wholesale business, which is currently limited to a few outlets in Boston, Amherst and Nashua. The Valicentis believe they’ve found the right recipe for success with Valicenti Pasta Farm. “There’s always something to do or try,” David says. “We’re getting better at what we’re doing—and learning all the time.” 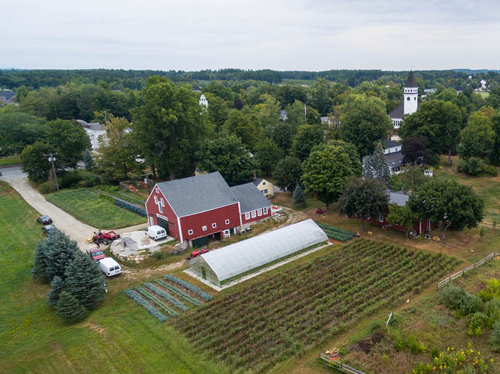 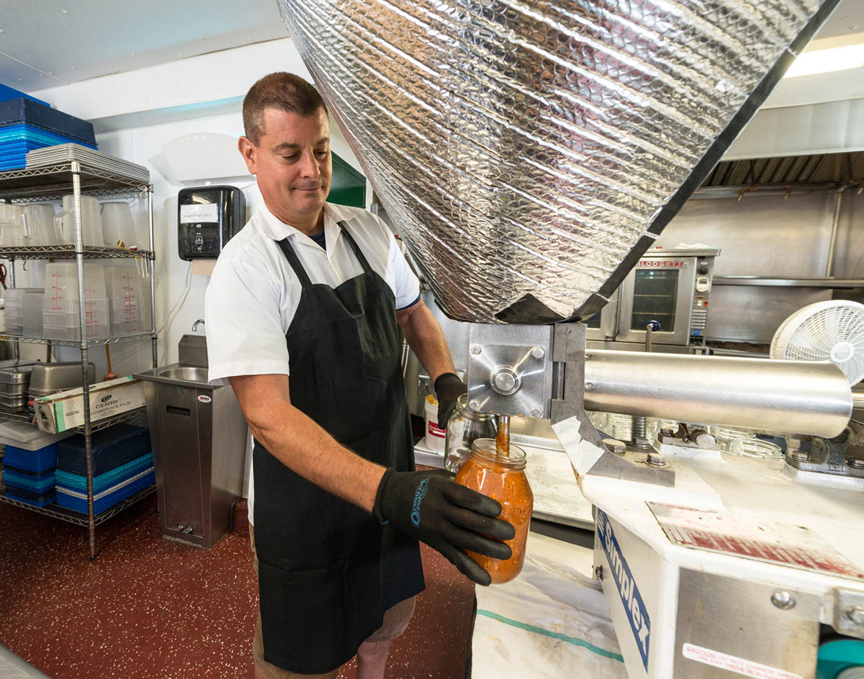 David Valicenti estimates the company will top $1 million in sales this year. 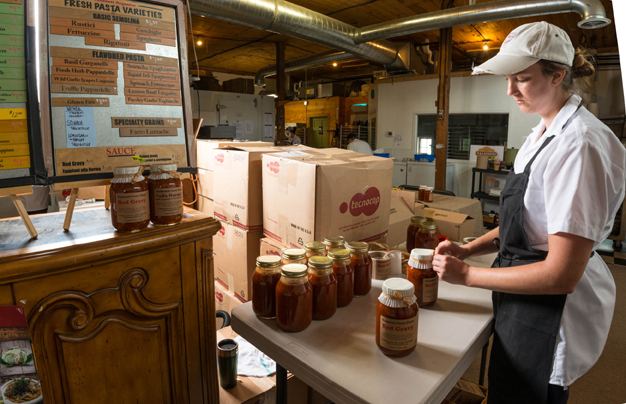 Sauces and pastas are produced and packed on-site in the Valicentis’ remodeled, late-nineteenth-century red barn in Hollis.