A skilled craftsman can leave an enduring impression on a client, a structure or a town. And with the right circumstances, that work can even mark an historical event. Fred Puksta has accomplished each of these tasks.

The Puksta family owned a neighborhood grocery store. Fred Puksta’s father, Charles, served as mayor of the town for 16 years and on the city council for 26 years, and they owned 27 apartments throughout town. Dependability and durability are just part of Puksta’s—and his family’s—work. 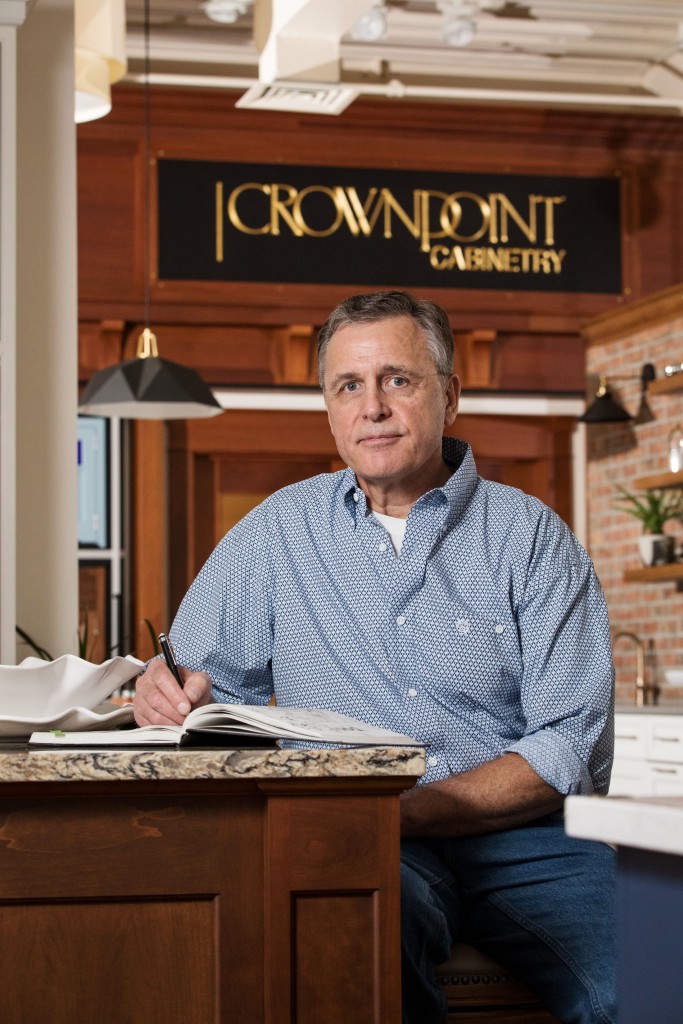 At Crown Point, Puksta has designed items
such as chairs, tables, free-standing pieces and even an entire library.

“We lived on the Sugar River, which would erode our land,” Puksta says. “So, for 15 years, we built one stone wall by hand. If you go into that old neighborhood now, all the old buildings are gone. The only thing still standing is that stone wall my family built way back then.”

It’s no surprise, then, that his work also carries a sense of permanence. Included in Puksta’s diverse portfolio are an 8-foot-tall clock on permanent display in the McAuliffe-Shepard Discovery Center in Concord and playing a role in helping to create the 500,000th commemorative Steinway piano.

“It’s all highly custom, but we do it all from this location in Claremont,” he says. “Oftentimes, our clientele is very discerning and they want certain things—custom pieces of furniture. Right now, I’m assisting in the design of an entire library, floor-to-ceiling millwork, cabinetry and mantle. I design the custom pieces that aren’t necessarily the typical cabinetry. Pieces like tables, chairs and items like that—free-standing pieces.”

It’s at that intersection of art and industrial design that Puksta is most comfortable.

New Hampshire Home [NHH]: Tell us about your time at Wendell Castle School of Design.

Fred Puksta [FP]: Most artisans in the higher echelon work in a particular style. What attracted me to Wendell was that he had a career in high-end artwork and industrial design. He not only did one-of-a-kind pieces with price tags in the hundreds of thousands of dollars, but he also did work for commercial companies—Knoll International and others. And at the same time, he’d do public art commissions. Those three aspects of his career are things I wanted to emulate: personal work, public art and commercial design. Those are the things that attracted me to Wendell. This man could do all three. Few artists and designers in history did that.

NHH: How did your time there influence your work?

FP: At the time, he was the best in the world at what they called “art furniture.” It’s highly sculptural yet highly functional. I walked into Wendell’s studio to take a tour, and it was a Friday afternoon. Craftsmen from around the world who were making these unique projects were there, and I got to talk to these craftsmen about how they did things. I said to myself, ‘Not only do I want to go to this school, I want to work for Wendell.’ I worked for two years and put together a portfolio to show Wendell so I could get the job, and I did. It was some of the best times of my life doing that work. One of the projects was the Steinway project. We all worked on that project and signed it where you can’t see, because Wendell was the primary artist. The piano had its world premiere at Carnegie Hall. I joke that I never made the Olympic team, but when we worked at Wendell’s studio, I had made the Olympic team of woodworkers. (An accomplished athlete and rower, Fred was the captain of the University of New Hampshire crew team, helped win the Head of the Charles and trained at Dartmouth College.)

NHH: Tell us about the 500,000th commemorative Steinway piano.

FP: It was really interesting because there were only three commemorative Steinways ever made. One at 100,000 that’s in the Smithsonian. Another one at 300,000 that’s in the White House—the one you see on TV with eagles holding it up. And the one Wendell designed and made. It’s very angular and contemporary. The interesting thing about the project is that Wendell designed the casework, which is what we built, and Steinway picked out the best harp for the inside. Part of the casework had a ribbon striping and an alternative veneer of two colors. In those ribbon stripes were signatures of 832 artists who played and endorsed Steinway pianos. It’s everyone from Van Cliburn to Vladimir Horowitz to Elton John. 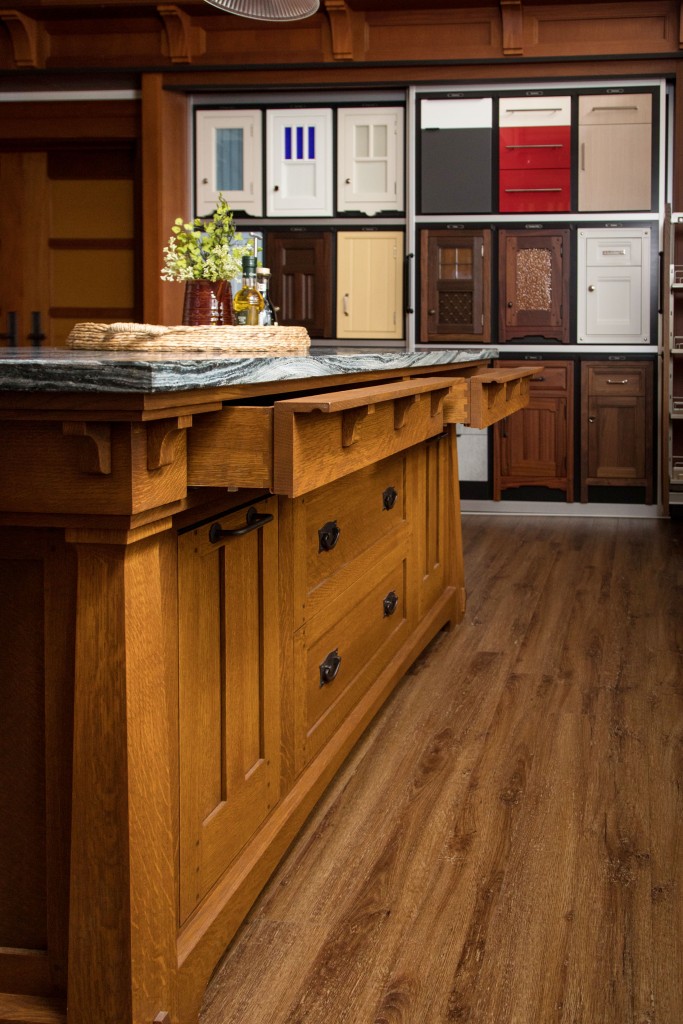 Fred Puksta is the product designer for Crown Point Cabinetry in Claremont, where he works on much more than typical cabinetry.

Steinway would send their master tuner, who, at the time, was assigned to Vladimir Horowitz, to our studio to make sure we were building in such a way that we would not harm the sound of the piano. He’d come up every month or so, and check the integrity of the sound. He commented one time that the way we built the legs, which is how the harp transmits music to the stage, was innovative in a way even Steinway hadn’t done. He liked that. The piano was a really prestigious project, and we all worked on it and then all went to Carnegie Hall for the piano’s world debut.

NHH: You created the “One Moment in Time” clock on permanent display at the McAuliffe-Shepard Discovery Center in Concord. How did that project come about?

FP: I applied for the project, which was a grant from National Endowment for the Arts attached to the planetarium construction. My project was not selected for various reasons—they wanted to distribute the funds as much as possible—but they did like the project. I saw the director of the planetarium at the time and presented the idea that I would raise the money for the project, if they would accept it. The fellow thought it was an interesting request. It took me two years of fundraising personally, approaching individuals and companies within the state to donate the money earmarked for this clock project, which took me another year to build and install.

It was a great project. One of the nicest benefits of it is when my children were small and they would take field trips to the planetarium, as they often did, they’d ask me to come along to stand with their classmates in front of the clock, where they could say, “My dad built this clock.”

NHH: What did that project mean to you?

FP: The McAuliffe piece is extremely personal to me. As a young boy, I always wanted to become an astronaut. The walls of my room were covered in pictures of astronauts and rockets. I had one teacher—she was actually a substitute teacher in grammar school—Mrs. Hamilton was her name, and she was really into space. If you asked her a question about it, that blew away the curriculum for rest of day. She’d talk about space for hours. I invited her to my home when I was a child. I brought her down to our grocery store, walked her in and showed her my room. She saw how I was into space. So, the idea that Christa McAuliffe got the chance to be a civilian astronaut for first time was amazing. It’s a lot of people’s dream to go into space, and [McAuliffe] was the first one who wasn’t an astronaut or a test pilot to get the opportunity. She was a teacher, and that always pulled me back to Mrs. Hamilton and the teacher/astronaut connection.

When I built the clock, my theory was to make something very large, knowing that little children would look up at it and it would look very tall. The symbolism started as a large sculptural spaceship in one sense, but in the other sense, the top is leaving the body of the clock. The body, to me, symbolized Earth, and the top symbolized Christa McAuliffe and when she left us and went to a better place. At the interface of where the top piece leaves the clock, there is 23-carat gold leaf. It’s the most precious material symbolizing her spirit shared with all of us.”

NHH: What do you like best about the relationship between art and industrial design?

FP: I like the fact that they’re essentially often the same thing. Sometimes we have career days at Crown Point, and high schoolers will come in. I tell them that if you think about it, everything you touch in your life has been designed by an industrial designer—your mouse, your phone, the car you drive, your refrigerator. And it all starts with artwork. It starts with sketches, which often turn into commercial products.

I tell students that when I was their age, teachers would tell you about different career paths, but industrial design was never brought up. I tell them about the aspect of having to do the artwork first, and then figure out how to mechanically make it. I draw on the furniture experience I have as an artisan and apply it to commercial design.