A special meal is one way to show how much dads are loved on their big day.

I admit that I am a “Daddy’s girl.” There is something very special about the closeness between dads and daughters. My dad guided and molded my character. To me, he was bigger than life; he was my hero. He could do anything, from fixing a leak in a dripping faucet to growing the most beautiful tomatoes. When I was a child suffering from whooping cough, he slept in a chair next to my bed. He taught me how to play basketball and drive, and drove me to Brownies. He had more patience than anyone I knew, especially when he tried so hard to teach me calculus. He found it hard to let go when I got married, and he was the best grandfather.

It is so fitting that we honor our dads on a special day, Father’s Day. The idea for a national observance came from Sonora Smart Dodd, a woman in Spokane, Washington, who was so inspired by a sermon that she heard regarding Mother’s Day that she started a campaign to do the same for fathers.

Starting locally, she enlisted the support of town ministers and the YMCA. She was so persistent that her idea eventually reached the desk of the great orator and politician William Jennings Bryan. He wrote to Mrs. Dodd telling her “too much emphasis cannot be placed upon the relation between parent and child.”

As her movement gained support, Presidents Woodrow Wilson and Calvin Coolidge joined the endeavor, as did Senator Margaret Chase Smith, who wrote to Congress that the nation should honor both parents—not just one. In 1972, President Richard Nixon made it official and Father’s Day was permanently established.

On Father’s Day, dads are treated like kings. Many of us prepare a special meal with favorite foods, and barbeques are particularly popular. Steak is the predictable favorite, but why not try something new and surprise the dad in your life—because he deserves the very best every day of the year. 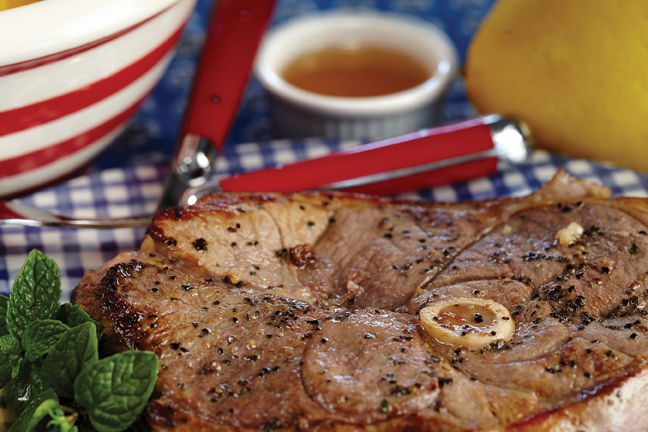 Lamb blade shoulder chops are far tastier than their more expensive, center-cut cousins, and that’s because the shoulder chops have more marbling. Marinate them first, then broil or grill, and serve with fresh mint sauce.

1. For the Mint Sauce, combine the whole mint leaves with the water and 2 tablespoons honey in a small saucepan, and bring the mixture to a boil. Reduce the heat and simmer the ingredients uncovered until the liquid is reduced by half. Strain the mixture through a fine sieve into a bowl. Add salt to taste. Set aside and keep warm, or make several days ahead and refrigerate (reheat when ready to use).

2. In a shallow bowl large enough to hold the chops in a single layer, mix the garlic, lemon juice, 1 tablespoon of honey, minced mint leaves, pepper and olive oil. Place the chops in the marinade, cover with plastic wrap and refrigerate for at least 2 hours or overnight. Turn the chops over once or twice while they are marinating.

3. Prepare a gas grill or preheat the broiler. Drain the chops from the marinade and grill or broil them. Use an instant-read thermometer for gauging when they are done: 145°F for rare, 160°F for medium and 170°F for well. Serve with some of the Mint Sauce. 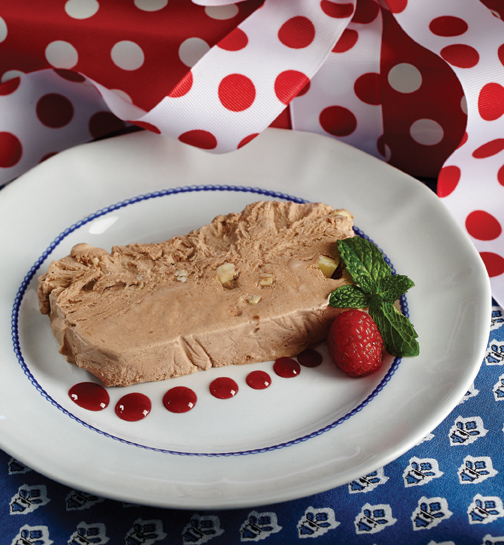 Spumone is a refreshing way to end a Father’s Day meal. Make it ahead and freeze it. Team it with fresh raspberries or strawberries, or make a coulis, a fruit sauce to drizzle on the plate for an artistic presentation. It will look like you have been in the kitchen all day!

1. Line a 10-by-4-by-2½-inch loaf pan with plastic wrap, leaving a 1-inch overhang. Set aside. Put the semisweet chocolate in a saucepan. Add the water and melt the chocolate over very low heat, stirring frequently until smooth. Set aside.

2. In a large bowl, whip the cream with 2 tablespoons of the sugar with an electric mixer until stiff. Set aside. In another bowl, whip the egg yolks with the remaining sugar until the mixture is thick and lemon colored.

4. About 30 minutes before serving, remove the foil, unwrap the plastic wrap from the top and unmold the spumone to a decorative dish, gently pulling away the plastic wrap. Use a knife dipped in ice water to make clean slices. For an elegant presentation, cut the slices on the diagonal and stand the spumone on edge to create a vertical look. Serve as is, or with chocolate sauce or a raspberry coulis. 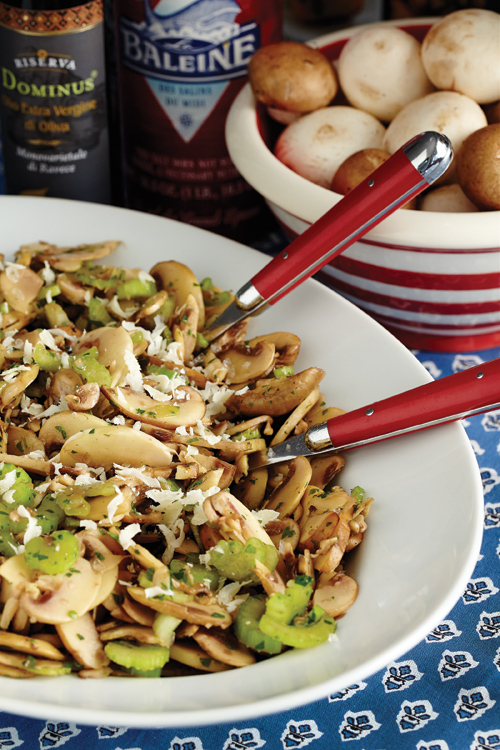 The success of this salad depends on slicing the mushrooms as paper thin as possible and using a good extra-virgin olive oil.

1. Place the mushrooms in a salad bowl with the celery, parsley and black pepper. Pour the olive oil over the mixture and toss.

2. Spoon the mushroom mixture onto a serving platter. Sprinkle the salt and cheese shavings over the top, and serve.