A Gem of a Boathouse

Made from handsculpted, drymounted granite and durable woods, this two thousand square foot structure was built to last and designed to embrace its natural surroundings.

Works of enduring architectural beauty take time—and teamwork. One collaboration of creativity, craftsmanship and, dare we say, courage blended together to create a one-of-a-kind, two-thousand-square-foot boathouse at the Lake Winnipesaukee vacation home of Paul and Sharon Steinwachs.

As the ultimate example of sustainable building materials, the boathouse is made of wood, slate and lots of granite. In fact, about 185 tons of hand-sculpted stone from Swenson Granite Works in Concord were used to build this two-slip boathouse sited on the homeowner’s twentyacre lot.

The project required three years and a rock-solid commitment from the homeowners for a lengthy permitting process. In describing the evolutionary process of design and creation, Paul credits the idea of using granite to project architect Sonya Misiaszek of Christopher P. Williams Architects PLLC of Meredith.

“I wanted something permanent,” Paul says. “The project evolved among a number of people—not just one. And the whole idea was that it had to be a boathouse that looked like part of its surroundings and did not stick out like a sore thumb.” 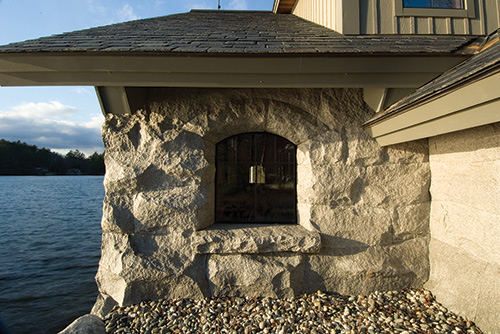 Blocks of hand-sculpted granite are artfully and tightly dry-mounted. Stonemason Warren Dixon preplanned each cut and chiseled out the fortyfive-degree angles at the corners.

Once the materials were chosen, the design evolved as well. “At one time, the boathouse was going to have shutters and window boxes,” Paul says. Now, with its natural beauty, Paul says he steps back and sees the boathouse as an example of what human beings—and perseverance— can create.

Built with an eye for nature

From the construction and permitting standpoints, building a boathouse in New Hampshire is not for the faint of heart, Williams says. Regulatory constraints are very strict when excavating a shoreline into the lake. Therefore, Williams and his team had to create a dam on the edge of the existing shoreline and dig a hole lower than that line to make way for the boathouse’s foundation. In addition, regulations prohibit pumping water back into the lake—it must be pumped inland to filter out the soils.

In choosing the site, Williams—an avid kayaker and specialist in sustainable green building practices—took to the water to check out the views.. 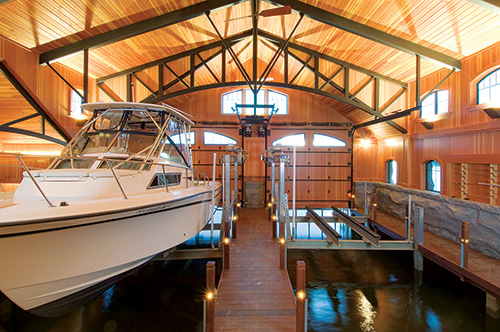 To protect boats from rough water during storms and to help bring the vessels to storage in fall, the boathouse features two interior boat lifts. The steel tresses framing the roof add to the enduring quality of boathouse’s design.

“The first thing you had to do was find the best place on the shoreline to build, where the water at the bottom has adequate depth. I ended up taking the kayak over and exploring the length of the shoreline to find the best spot. You certainly want to look at where the boathouse would fit into the existing landscape and minimize the impact on the shore and the trees,” Williams says.

Situated between two beaches and a carefully preserved patch of thriving wetlands, the boathouse has two interior slips along with a third outside.

As for sustainability, well, granite will outlast us all, the slate roof could easily see a hundred years, and the steel roof tresses and window frames are nearly indestructible. Even the wood used in the building was chosen for its durability in wet conditions. Fir is used in the eaves and the decks are made from an exotic wood called ipe, known for its density and resilience because it doesn’t splinter.

While outside the look is rugged and masculine, Misiaszek says, the inside softens a bit with hand-crafted Douglas fir paneling, cabinets and detailing. 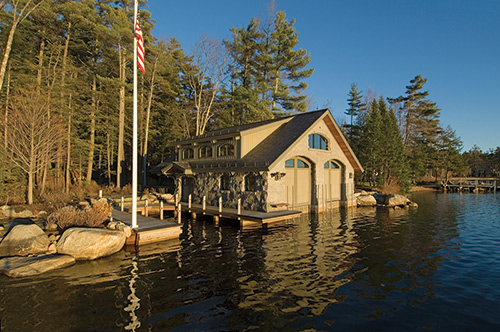 “We carried a wainscot of granite up to the windowsills,” Misiaszek says, “then we used Douglas fir on a vertical line to lighten it up, and give it some height and volume on the inside. It just kind of glows inside when the sun comes through.”

Landscape designer Connie Maatta of Design Plus Landscape Services in Plymouth says it was important to retain the vision of what the landscape was like before the new construction, then work to restore as much of the natural setting as possible.

“We protected a lot of the trees that were around; there was minimum disturbance and maximum protection,” she says. To showcase the rugged, natural lines of the granite structure, plantings were set at least two feet away from the foundation.

Misiaszek credits members of the entire team with innovative contributions. Contractor David Frost of White House Construction in Gilford created a unique gate under the doors to keep out animals and provide extra security.

In addition, no mortar was used in building the boathouse. Each piece of granite fits together as tightly as a jigsaw puzzle, with the cuts and textures of each stone thoughtfully predetermined by masterful stonemason Warren Dixon of Moultonboro.

“Warren is the one who brought this project to life,” Misiaszek says.

Dixon, an experienced mason, had used granite before but not in this grand scale. For this project, his style evolved—Dixon worked with the granite for several months before almost accidentally discovering the particular cut of stone that went on to create the stylistic look of the boathouse.

At first, the team was trying to create a building with strong, forty-five-degree corners. But, something was missing, Dixon says. When he walked to the site one morning and saw a broken corner of one chunk of granite, inspiration struck. “All of a sudden, I knew that was it. That was the defining part of the style.”

Each cut on each block was meticulously preplanned; the look was drawn on paper before Dixon worked on the stone. The work increasingly became more creative and closer to creating sculpture, an art form Dixon dreams of pursuing next year in Italy.

“This project did so much for me. It was one of those once-in-a-lifetime experiences,” he says. “Is it a work of art? That’s what it felt like.”