Designed for the Site

Thanks to a design team that has completed many projects over many years, a Minnesota couple was able to create a home that looks like it has always been on Squam Lake. 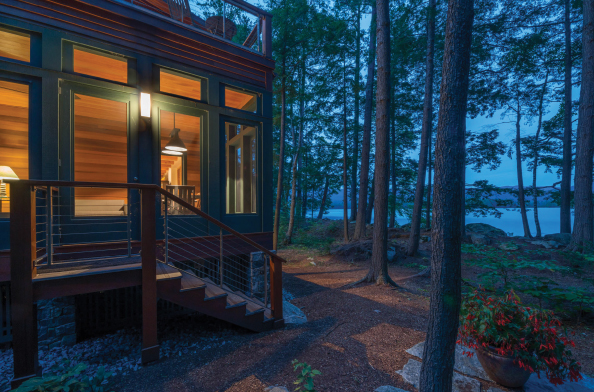 Homeowners enjoy a classic view of Squam Lake through the pines. The screened-in porch has a fireplace, and in cooler weather glass windows can enclose it.

From the water, during the day, Linda and Ken Cutler’s house on iconic Squam Lake is barely discernible among the trees. At night, it has a warm, inviting glow. Inside, the rooms are airy and simple. The main living space comprises the kitchen, dining area and living room with a large stone fireplace. The furnishings are mostly a mix of mid-century modern with arts-and-crafts. The art is modern.

The feel of the house suggests there is plenty of time for anything—a quick hike up nearby Cotton Mountain’s steep but rewarding trail, or an evening paddle to a small island to watch the sun set. The open spaces in this house feel unencumbered, meditative and freeing.

As one neighbor commented, “It feels like it has always been there.”

The path to New Hampshire

“We came to know the area while our son was in boarding school, and then one summer he worked for the Squam Lake Association,” Linda says. “We started looking at properties in 2013. By then we’d gotten to know architect Chris Williams whose daughter went to school with our daughter, and he began looking for us as well.”

Most important, the Cutlers’ began to imagine their new home in New Hampshire while living in Minnesota. They are avid hikers and love the outdoors. “We knew we wanted the house to blend in and take advantage of lake views,” Linda says. “Inside, we wanted an open floor plan, and a contemporary look with white walls and wooden beams. We also wanted a stone fireplace.” 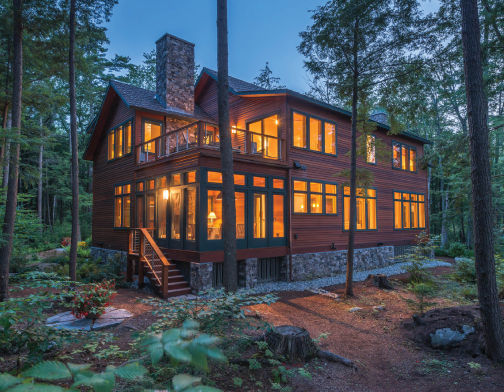 The home’s cedar siding, blue-green trim and Ossipee Mountain stone blend with the woodland setting along the lake.

The hunt continued. The Cutlers began to buy a few key pieces for this new home: a red Chinese traveling chest to double as a coffee table; a large, colonial, mid-nineteenth century, Indian cabinet to hold liquor and serve as a bar.

The Cutlers made an offer on one property, and it fell through. Then this land became available. “We didn’t see the property until the closing,” Linda says. “It’s fantastic, and it had never been built on.”

Working with Christopher P. Williams Architects, PLLC in Meredith, the Cutlers began a collaborative association with architect Penelope Marvel. Or more accurately, the creative conver-sation that Linda and Ken began with Williams simply expanded. “In my office, I give people a lot of license so they can really put their heart into their work,” Williams says. “We’ll talk about the project, and I might ask, ‘Hey, have you thought about this?’ But the actual detailing here is all Penny’s.”

However, Williams did help with the permitting process, which took about a year, given the wetlands and small buildable area.

The Cutlers also wanted their bedroom to have morning light with a small deck and hot tub. Marvel soon found that this request, given the house’s small buildable footprint, became a determinative design element. “It helped us to lay out the rest of the home,” she says. “So, we stacked the deck over the screened-in porch and the rest followed.”

In fact, the hot tub was the Cutlers’ first major purchase, since its weight had to be accounted for in the design. 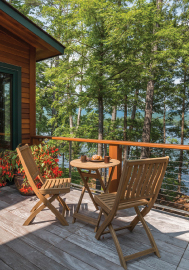 Just off the master bedroom, this private deck
has an airy view of the lake.

Marvel’s entryway design plays on a favorite print that the Cutlers own, the view of the lake and a square sheltered doorway with granite steps. The pattern of the cedar clapboards outside is echoed in the Douglas fir ceiling inside.

“That took a lot of concentration to make all of those ceiling angles come together, and be clean and flat,” Frost says. In the stairwell, he incorporated small, decorative pieces of maple into the arts-and-crafts balusters, a touch that Linda suggested. Frost’s careful, elegant work is evident from the maple flooring to the three upstairs bedrooms (each with its own bath) down to the sliding, wooden lattice screens along the foundation. Frost also incorporated a nifty boaters’ trick to use Astro Turf in the storage space under the house so canoes and kayaks can be stored with one quick, easy shove.

“And he kept in constant touch with us through the entire process,” Linda adds.

In addition to the main living space, the downstairs has a small den and bath. This flexible space can double as a guest bedroom, a downstairs room for children and other future uses. The screened-in porch also has a fireplace. In warmer weather, screens replace the glass windows.

Throughout the house, Marvel used Kolbe Windows and Doors, their new VistaLuxe Collection.

A long zinc-topped dining table from Crate and Barrel adds a stylish, yet old-fashioned touch. The lights, also zinc, are from Restoration Hardware.

“Penny helped us find many of the finishing details,” Linda says. “She’d email links with suggestions for hardware, and even grates for heating or showers. Then I’d shop for them in Minnesota to see those items for myself.”

After reading about Sandwich craftsman Derek Marshall and his handcrafted glass lights in New Hampshire Home (Lighten Up! in the January/February 2017 issue), Linda, Ken and Marvel made an appointment to meet with Marshall. After perusing glass and light choices, Linda and Ken—with characteristic decisiveness—made several choices, most notably a custom chandelier for the entryway, pendant lights for the kitchen island, another chandelier for the dining table and lights for all three upstairs bathrooms.

Usually Marshall’s communication with customers is solely online, and he sends glass samples free of charge. “These lights are like jewelry for the interior of your home,” Marshall says.

The kitchen cabinets—which are sleek, white and modern—were purchased from Kitchen Encounters in Laconia. “We chose a glass mosaic tile for the backsplash to complement Marshall’s lights,” Marvel says.

Most of the wooden furniture was purchased from Pompanoosuc Mills in Concord—pieces include the television cabinet, which has a retractable screen.

Linda and Ken also bought rugs at Tribals: Rugs By Hand in Peterborough and original artwork at the Patricia Ladd Carega Gallery in Center Sandwich.

A look at the land

Perhaps the most exhilarating aspect of the property is the land itself. Having never been built on, the land does not have the usual invasives, such as poison ivy and a host of other culprits. Instead, native plants thrive in the wetlands—sedges, tussocks of grass, ferns, moose maples and sweet ferns. Garden designer Connie Maatta, of Design Plus Landscape Services, LLC in Plymouth, and landscaper Scott Burns, of Scott Burns Landscaping, LLC in Meredith, collaborated. Thanks to the silt fence installed by Frost to protect the wetlands through the construction phase, the native landscape has remained intact and healthy.

Bulbs are not in the mix. But hybridized smartweed and catmint are—along with shrubs, such as Winterthur viburnum and clethra. Two specimen plants, a pagoda dogwood and a pine cultivar, are strategically placed along the entryway. Both will mature and be pruned into strong, pleasing shapes to enhance the home’s asymmetrical design.

For three months, quietly, in the background, Ben Billin and his team, of Benjamin P. Billin Stone Masons in Plymouth, built a dry-laid chimney and fireplace for the main living space. Billin began his career at seventeen while building walls with Ossipee Mountain stone. This fine-grained, durable, dun-colored granite has become a precious commodity locally, but Billin had his cache for this project. To create this chimney, he used bush hammers and small chisels to fit each stone into place. The hearth is leathered Caledonia granite from northern Maine. This same combination is repeated on the porch, and the Caledonia granite is also used for the entryway steps. Billin cut Ossipee Mountain stone to face the foundation as well.

For Ken, this stonework was key to his vision for their new home. “Ben’s work is fantastic,” Ken says.

Looking out at the lake, an earth berm—formed over thousands of years—continues along the shoreline like an old trail. Waves lap against the shore, and in winter, freeze into ice dams, creating this topography. Now on this site, when there’s rain or snowmelt, water filters through the wetlands, returning clean and fresh to the lake, just as it always has. 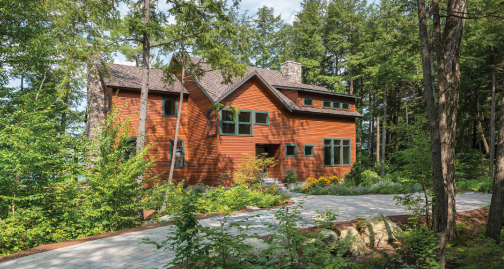 Native and specimen plantings complement the home’s asymmetrical design. Blueberry and woodland sods are a key element in creating a green tapestry
around the home. 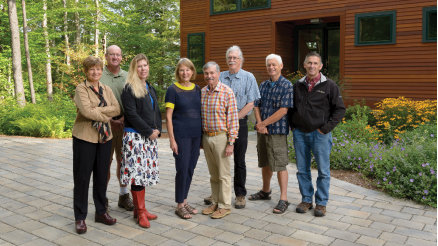 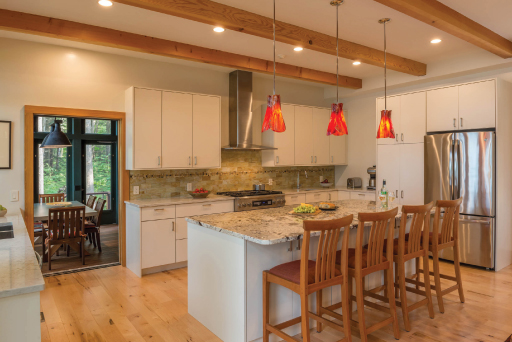 This sleek kitchen stays bright with views of the lake, light maple floors, and white walls and cabinets. The stainless-steel appliances include a Dacor stove with a gas cooktop and an electric convection oven. The pendant lights are by Derek Marshall of Derek Marshall Sculptural Lighting, LLC in Sandwich. 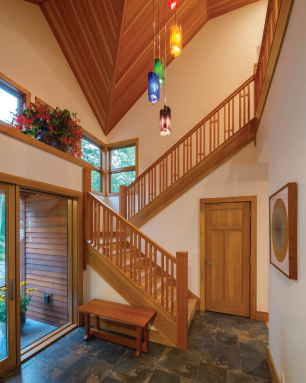 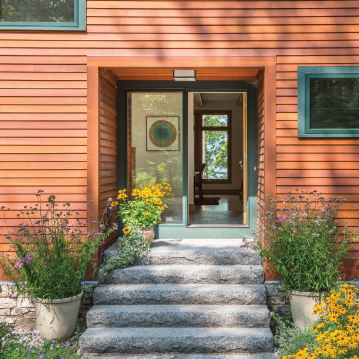 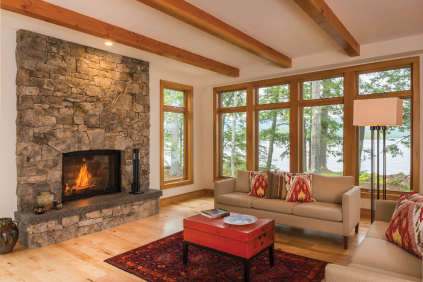 Ben Billin’s Ossipee Mountain stone fireplace (in the living room and seen from the dining area) stands unadorned and beautiful. This open, modern living room invites conversation. The space includes a small bar and a television screen that, with the push of a button, will appear for those must-see movies and sporting events. 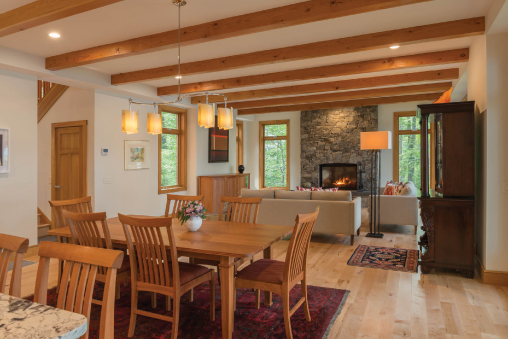 The dining room’s chandelier is by Derek Marshall.