In the late 1980s, the stars aligned for Mary Ann Esposito. The time she spent at her mother’s and grandmothers’ knees in the kitchen, along with all those hours teaching cooking, studying Italian and traveling to Italy were coming together to create something big and new.

“One day when I was typing up some recipes,” Mary Ann says, “[my husband] Guy said I should put them together for a show on New Hampshire Public Television [NHPTV].” The idea seemed far-fetched at the time, but she sent a proposal to the station’s general manager. He declined at first, but once NHPTV moved to its new facility, he changed his mind.

So in the summer of 1989, the first program was filmed in Mary Ann’s kitchen at home. The eleven-hour day was “tortuous” and “more work than we ever imagined,” she says, but twelve more episodes quickly followed and the first Ciao Italia series debuted on PBS in January 1990. At that time, Ciao Italia was the only regional Italian cooking show on television and the only national television series produced in New Hampshire.

Ciao Italia quickly became one of the most popular programs on PBS, and Mary Ann joined an elite group of public television chefs that included Julia Child, Pierre Franey, Graham Kerr, Jacques Pepin and Martin Yan. In 1991, Mary Ann’s first cookbook, Ciao Italia, was published and, within a few years, had become a best seller (more than 350,000 copies have been sold). Nella Cucina followed in 1993 and then Celebrations Italian Style in 1995. In 2011, Mary Ann published her twelfth cookbook, Ciao Italia Family Classics, which is filled with more than two hundred recipes, information about cooking techniques and ingredients, and wonderful anecdotes from her travels and family history. She’s now working on her next book, tentatively titled Italianissimo and due to be published next year, which focuses on the top five recipes from each of Italy’s twenty culinary regions.

Today, Ciao Italia is the longest-running cooking series on public television, and Mary Ann has not strayed from her original mission. She continues to emphasize the importance of seasonal and local ingredients—a tradition that goes back to her childhood when she spent countless hours with her mother and grandmothers, making bread, canning produce and preparing meals for her large family (Mary Ann is the eldest of seven children). “My mother and grandmothers are at the heart of my Ciao Italia Family Classics,” Mary Ann says, “and I try to keep them alive through the recipes and stories in
that book.”

Gardening also has deep roots for Mary Ann (she remembers her father planting one hundred tomato plants in the family’s garden near Buffalo, New York) and also for Guy. “From the time he was in medical school, “ Mary Ann says, “Guy has always had a garden, even if it was only a twelve-inch-by-twelve-inch one.” 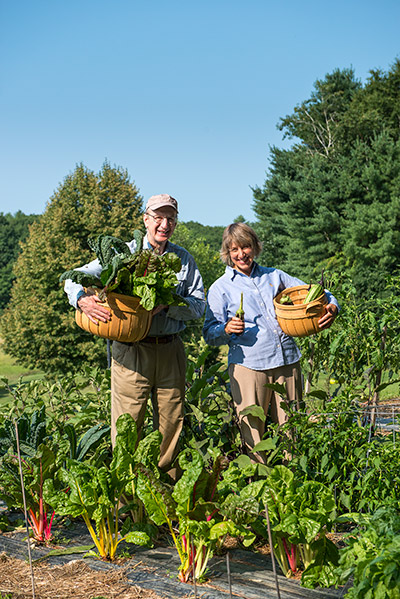 Guy and Beth Esposito gather some of the day’s harvest. In his basket are Tuscan kale (Cavolo nero) and Bright Lights Swiss chard. In her basket are Zucchine Romanesco  and Nadia eggplant; in her hand is an Oriental eggplant. The vegetables are grown from Franchi Seeds, and can be ordered from ciaoitalia.com or growitalian.com.

As time went on, Guy’s interest in gardening continued to grow—and so did his gardens. Last summer in his twelve-hundred-square-foot garden in Durham, he grew twelve kinds of lettuces and only sixty tomato plants (he used to grow eighty). Other vegetables included peas, radishes, various kinds of eggplant, broccoli, radicchio, leeks, arugula, zucchini and special Italian pumpkins. He gets seeds from Franchi Seeds, a company in Bergamo, Italy.

Guy is the official head gardener for Ciao Italia and has been featured in several episodes over the years. “I did these shows in the garden setting because I wanted people to realize where their food comes from,” Mary Ann says. “That’s quintessential Italian!”

One year, she asked Guy to grow globe artichokes, a challenge for any gardener in New England. But he got the plants and babied them, and sure enough, Mary Ann got her artichokes. “It was amazing,” she says.

Gardening is Guy’s passion and also a way for the family to spend time together. Mary Ann helps with the planting, and when daughter Beth visits from Switzerland, where she’s a teacher, she lends a hand, too. “We love passing on what we know to the next generation,” Mary Ann says.

The importance of teaching

Education has always been in Mary Ann’s DNA, and after college, she worked as a high-school teacher. Later she became a student again and began taking cooking classes in Italy. She went on to graduate school and completed her master of arts thesis on a fourteenth-century cooking manuscript written in Italian. 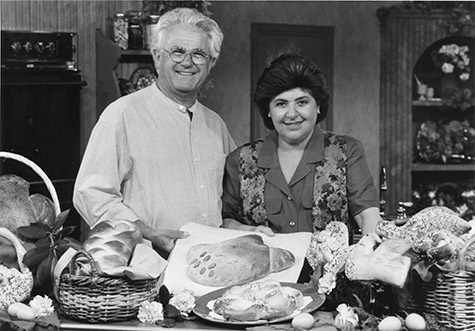 In 1994, children’s book author and illustrator Tomie dePaola joined Mary Ann Esposito on the set of Ciao Italia at NHPTV in Durham to make a dove-shaped bread called columba, a classic Easter treat.

NHPTV is hosting a twenty-fifth anniversary dinner in honor of Ciao Italia’s milestone on Tuesday, April 21; the venue is TBA as we go to press. Mary Ann will create the menu, and introduce each course and the wine it is paired with.

Tickets for the main event—which include cocktails, book signing and dinner—are $125 and may be ordered online at nhptv.org/ciaoitalia.

And education has been Ciao Italia’s mission from the beginning. “My goal is to teach people what real regional Italian cooking is about,” Mary Ann says. “There are twenty regions in Italy, and they are all different. I want to make those differences clear.” The series’ early seasons focused on Campania and Sicily, where her family comes from and featured its staples, such as pasta, tomatoes and grilled vegetables. Subsequent seasons have featured the foods of Piedmont, Umbria and Tuscany, among other regions.

Over the past twenty-five years, Mary Ann has made more than fifty-five trips to Italy, and every fall, she and Guy take a group to a cooking school to learn the particulars of that region. This coming September’s destination is Venice and the Veneto region, which includes the towns of Verona, Padua, Vicenza and Asiago. Look for details on ciaoitalia.com and italiansun.com.

This spring, keep an eye out for Ciao Italia’s twenty-fifth anniversary season’s programs (check your local PBS listings). This series showcases the best of Ciao Italia from the last twenty-five years, and all the episodes have new introductions that were filmed in Puglia, Italy, last summer. This summer, Mary Ann will be back in the studio, producing programs for the twenty-sixth season, whose theme will be based on her forth-coming book, Italianissimo.

Ciao Italia continues to be popular with people of all ages, all over the United States and beyond. And Mary Ann shows no signs of slowing down. Despite a rigorous schedule that includes more than forty public appearances a year, she says she loves getting feedback from fans and viewers. Recently a woman told her that she had been afraid to make pasta until she watched Ciao Italia. “I love teaching people,” Mary Ann says. “It’s so much fun! I want them to learn about the ingredients and come away with something they can enjoy and apply.”