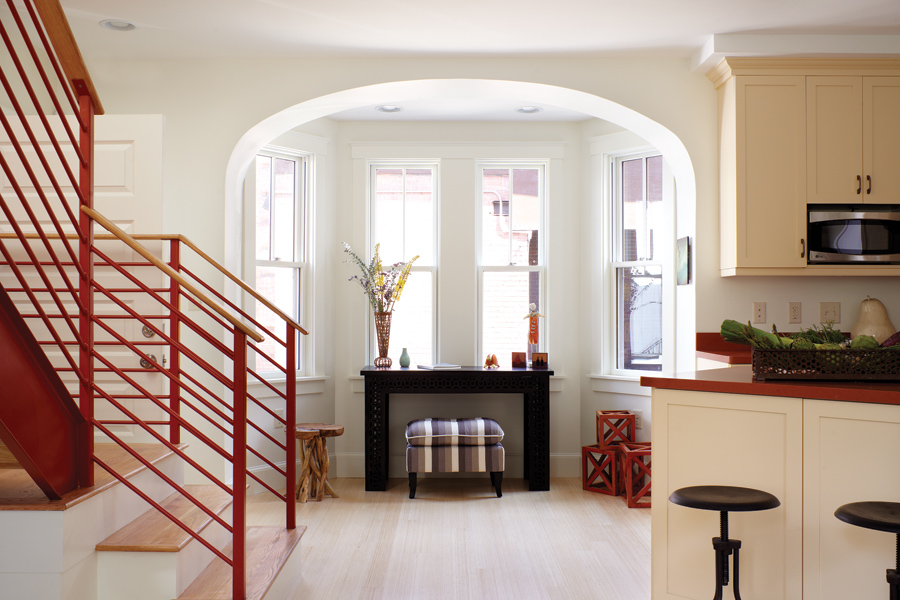 Bay windows frame an alcove in this nineteenth-century former carriage house in downtown Portsmouth. Bob Cook and Paul Fowler of adaptDESIGN in Portsmouth reorganized the building’s interior and opened the space to create two side-by-side apartments.

Longtime residents Geoffrey and Martha Fuller Clark have called Portsmouth home since the 1970s, when they purchased the Langley Boardman House, an 1805 Federal-style home just steps from the city center. During the thirty-plus years they’ve lived in their home, it has been painstakingly restored and retrofitted to accommodate their family (they have three adult children) and numerous guests. So when the carriage house that abuts their property came up for sale sixteen years ago, the Clarks were eager to purchase it.

The carriage house—part of a complex of Beaux Arts and Italianate-style  buildings designed by architect Gridley James Fox Bryant between 1864 and 1865 for Captain William Parrot—contains two apartments. At various times, one of the Clark children or other college students have lived in the building, but several years ago, the Clarks decided to turn it into an upscale rental property. They wanted to update the building’s interior, while keeping its historic exterior.

“We’ve lived in our house since we got married,” Geoffrey says. “We raised our children here, and dealt with numerous quirks, such as leaky windows and crooked floors. Renovating the carriage house was our chance to build something new.”

To help with the building’s transformation, the Clarks turned to Bob Cook, lead architectural designer on the project, and architect Paul Fowler of adaptDESIGN in Portsmouth. Cook, who has years of experience in historic renovation and design, knew Martha from working together as trustees of the Portsmouth Historical Society.

The apartments in the two-story, red-brick carriage house were originally designed with one on each floor. After walking through the space and talking with the Clarks, Cook and Fowler believed a better way to utilize the building’s height was to reorganize the interior and create two side-by-side apartments. “We determined that we needed a pretty dramatic demolition; the inside of the building would be gutted,” Fowler says. “We could restore the exterior, then rebuild the interior.”

“We saw right away that we could restore the carriage house exterior, but the Clarks wanted something modern on the inside, something surprising,” Cook says.

The interior demolition proved logistically challenging. The construction team, led by Whitcher Builders of Strafford, had to move materials in and out almost daily. “We had to deal with the constraints of the area,” says Whitcher’s operations manager Stuart Mitchell. “There was no room to store anything inside because there was limited space; and outdoors, we were conscious of the neighbors and really had to coordinate getting materials in and out of the building.” Whitcher’s crew got creative, moving materials for removal to other construction sites the company was using around Portsmouth, and creating a schedule for subcontractors and suppliers to get materials—such as paint, flooring, doors, windows and cabinetry—into the space when there was room. The crew also kept in constant communication with tenants in neighboring buildings.

An historic home renovation requires patience, attention to detail and a sense of adventure, traits the Clarks come by naturally. Martha, a long-time preservationist and art historian, is a state senator. Geoffrey is a retired gastroenterologist as well as a pilot, sailor and outdoor explorer.

“The carriage house has beautiful finishes, like brick quoins, a brick corbelled cornice and two flat arches at the former entries,” Cook says. “John did an amazing job restoring the brickwork. His work reflects the skills of masons of the time.”

During the interior demolition, crews discovered the original herringbone brick floor underneath the ground floor of one of the apartments. “It was in pristine condition, with the original granite and brick,” Fowler says. “But it wouldn’t have been energy-efficient to leave it, so we built over it.”

To make way for floors with radiant heat, the carriage house’s original pine floors were donated to Strawbery Banke for reuse.

The Clarks also wanted an emphasis on energy efficiency. A layer of wood strapping and foam insulation separates the carriage house’s outer brick walls from interior brick walls. Any moisture is drawn to the center of the bricks, leaving the rooms dry and warm. Radiant heating in the floors and insulation in the attic help keep the apartments comfortable. Bamboo flooring—a renewable resource—was installed in both units. Although each unit is air conditioned, windows and skylights were placed to take advantage of cross-ventilation, so the building cools naturally. All sinks and toilets are water-efficient as well.

Efficiency also came into play in each unit’s kitchen; both were designed by Dovetailed Kitchens in Portsmouth. Because the apartments are small—nine hundred square feet in unit A; six hundred square feet in unit B—Cook, Fowler and Dovetailed Kitchens wanted to maximize space. An under-counter refrigerator and dishwasher help save space; a small island provides additional storage while separating the kitchen from the main living area on the first floor. Open stairwells lead from the ground floor; a smaller set of stairs leads to the third floors of both units.

The new spaces are filled with natural light. Skylights were added to the roof, and two windows, one for each unit, were added to the back of the building. A bay window on the front was retained, and the ceilings in the

During their initial exploration of the carriage house, Cook and Fowler discovered they could carve additional space from the building’s attic area, under the mansard roof. Accessed by stairs from each unit, the space—which opens to the second floor—offers additional storage.

Because the Clarks consider the carriage house an integral part of their property (it overlooks their garden), they also installed blinds so the units have a unified look from the exterior. The only hint of its contemporary
interior is the carriage house’s modern, glassed-in entryway.

Once renovation was complete, the units were quickly rented. The Clarks are happy with the results, not only from a design standpoint, but also because they’re pleased to provide housing near downtown Portsmouth.

“Years ago, people wouldn’t have spent the time or money to renovate this building,” Martha says. “Now there’s a demand for housing in this area that enables young people to live and work in Portsmouth, and easily access downtown.”